It never occurred to me to shop for a casket for the baby.

Perhaps because I was hospitalized during those final weeks, and, while the situation was grim, I still held on to a shred of hope.

I could not allow my mind to go there. I could not plan for her death. For their death.

Even when the stark reality began to set in, I had already decided there would be no casket. I had previously attended an infant funeral, and the vision of that tiny white casket would be forever burned into my brain.

No tiny white casket. I knew I would choose to have the baby – or babies if that is the way the Lord decided to go – cremated so that I could keep hers (or God help me – their) ashes near me always. And please God, I prayed, if there has to be a funeral, let it be for only one of the babies.

Something told me we’d never bring home both babies.

Shortly before we received our diagnosis of Twin to Twin Transfusion Syndrome (TTTS) on September 28, 2011, I already felt uneasy. Just a few weeks prior, I had attended my first “Multiples of the Midlands” club meeting. My husband and I shopped at the Twins Consignment sale, where I bought matching crib sets and three sets of matching sleepers. I wanted to buy every baby girl matching outfit they had, but I held back. I felt this tugging sensation and unease. Even then, I seemed to know I’d never use two sets of matching clothes.

The only outfit Kathryn would ever wear would be her burial gown. #infantloss #PAILAwareness #October15th via @katbiggie

The only outfit Kathryn would ever wear would be her burial gown. The beautiful white gown, hiding the damage that had been done to her tiny, not even 5 pound body from the hydrops caused by the awful disease of TTTS. (I don’t use this picture very often, so I just noticed tonight that the gown had a beautiful butterfly in the center.) 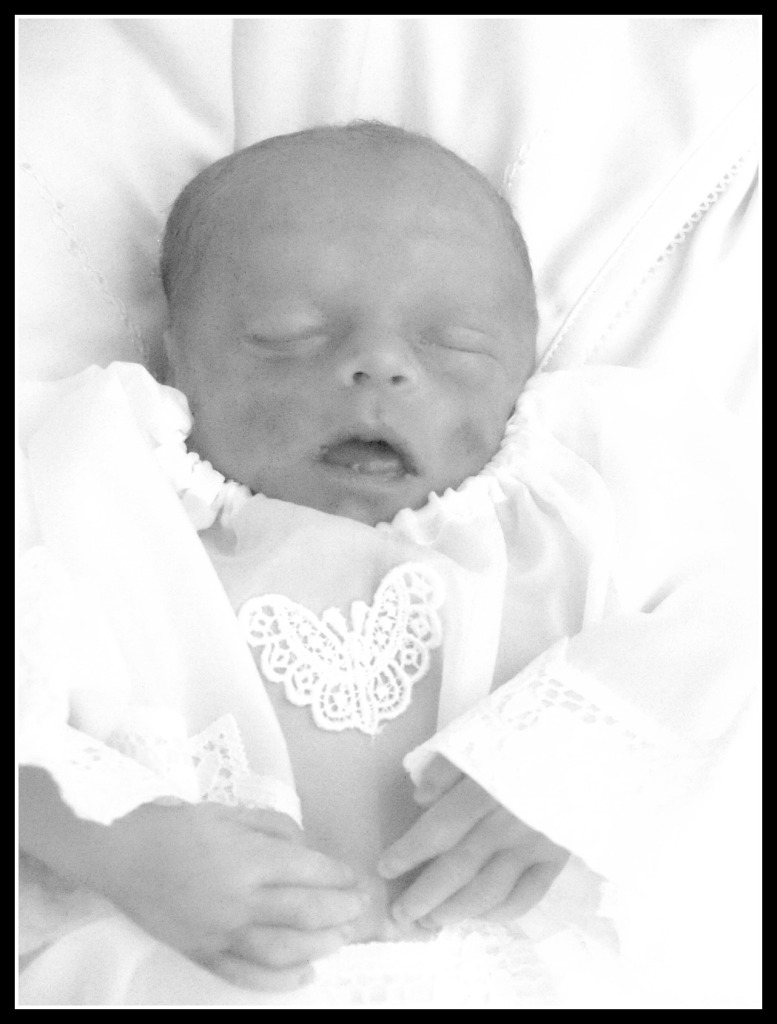 I never even thought about asking to hold her while she was still attached to the machines that were keeping her alive, so that I might see her eyes open just once and look at her mommy.

I never thought to ask about taking pictures of her next to her twin sister.

So, no. I never thought about picking out a casket.

And it’s not because I wouldn’t have wanted to pick one out, but because I was totally unprepared to deal with her death.

Since then, I have seen examples of other parents who knew their child would die shortly after birth, and how they were able to make plans and preparation for their short, but so precious, moments with their baby.

I wish I had been prepared.

I wish I hadn’t had to make a phone call, alone in my recovery room, three days after giving birth, to the funeral home to begin making arrangements during a time of hazy craziness.

I am not sharing these details with you to make you feel sorry for me. I am sharing it because October is Pregnancy and Infant Loss Awareness Month. I will be sharing as many stories and resources as I can.

You never know when you may be supporting someone who is in a similar situation.

While I would never wish these circumstances on anyone, I would want them to have friends and family who would know how to help them make decisions and survive at a time when they’d rather be dying themselves.

So, resource number one:

Now I Lay Me Down to Sleep.

A beautiful nonprofit providing the gift of remembrance to parents who have just lost their infant.  NILMDTS has volunteer photographers located all over the place who will come and take beautiful photos for the family. These photos are priceless memorabilia.

NILMDTS is always looking for volunteers and donations. Please go to their website to find out more.

Imagine a photo session where each moment is a last moment, where there will be no second takes, where what you’re doing becomes a family’s most prized possession. Are you looking for a way to share your talents with your community? Are you willing to help a family create a lifetime of memories, in only moments? Are you willing to selflessly give of yourself in order to help a family begin to heal a broken heart? ~ NILMDTS website