Today we hear from Laura D. who is sharing her TTTS journey with us. Her girls Elena and Diana are TTTS double survivors (thankfully!) but they still had a tough journey to make it here alive. Twin to Twin Transfusion Syndrome is never an easy battle. Thank you Laura for sharing your girls and your story for this weeks TTTS Tuesday.

3 years ago in March i found out that i was pregnant, it was shocking as it was not planned at all, we had 3 children already, had discussed having 4 but didn’t think it would happen so soon with our youngest being 6 mo old at the time. 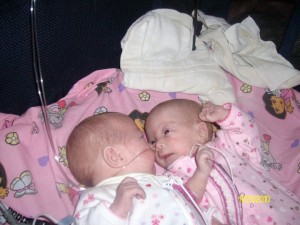 I remember how shocked I was because we had been taking every precaution and I was also breastfeeding the youngest. I found out on a Saturday and then took another test the following Tuesday when the 2nd test was positive I called my OBGYN for an appointment. The appointment was scheduled for April 22nd almost 4 weeks away, I didn’t want to wait that long, but they said i needed to be at least 6 weeks along to get a good ultrasound reading.

Time drug on, but eventually April 22nd arrived and I was nervous, they took me back to ultrasound and asked me to take a pregnancy test just to be sure, then they proceeded with the ultrasound. All the sudden I heard “there are 2 in there”!

I said What! as I stared at the screen in utter amazement, my mom was with me and was also very shocked. My husband and I wanted 4 kids and yet now we would have 5, it would be a lot of work but I knew we could do it.

At the time of the ultrasound I was actually 9 weeks pregnant, little did I know that in 9 more weeks things would change. When i got home and told my husband he was just as shocked as I was, it was then that we started telling people that we were having identical twins. Life was good and we were thrilled.

9 weeks later at a routine ultrasound the 4th ultrasound of the pregnancy my OB said he saw a size difference between the girls and said that he was concerned that it might be TTTS and wanted me to see a Perinatologist about this. So he sent me to Charleston, WV to see Dr. B at CAMC women’s and Children’s hospital.

Dr. B did a very lengthy ultrasound where they did several measurements and other readings, then they told me that the twins were girls. After the ultrasound they took me to a consultation room where it seemed I waited forever until Dr. B came in and told me that the girls had what is called TTTS or Twin to Twin Transfusion Syndrome. He explained that baby A Elena was the recipient because she was the bigger of the 2, and baby B Diana was the donor and was giving her sister most of her blood and nutrients. He said that the best thing to do would be to go to the Fetal Care Center of Cincinnati to have a procedure known as Laser Ablation done, where they would go in and cauterize the 4 blood vessels that were causing Elena to receive the extra blood and nutrients, that he was hopeful that the procedure would work.

In attempt to be closer to home and to possibly stay with family I did some research to find another possible location to have the procedure done and Dr. E in Pittsburgh popped up. At the time I was told by his staff that he had done the procedure while supervised but had never done it solo. This concerned me a lot and Mary from the TTTS Foundation talked to me and calmed me down she assured me that the better dr’s were in Cincinnati and although the dr in Pittsburgh was capable he was not that experienced.

So I went to see Dr. E in Pittsburgh and after a 3 hour ultrasound he told me that I had 5 options, 1. Do nothing and let them die, 2 save the bigger one to save the smaller one, 3 terminate the entire pregnancy because I already had 3 healthy children at home, 4 Amnio Reduction would not likely help and because of my weight I was not a good candidate for the surgery.

I decided at that point that i would go to Cincinnati, the next morning after I had gotten home from Pittsburgh, Dr. E called to say that he had scheduled an Amnio Reduction with Dr. B in Charleston and that i would need to go to Cincinnati to have the surgery done later that week. The Amnio reduction took place on July 2nd I remember it well it was a Friday, the following Tuesday I was scheduled for the surgery under the very capable hands of Dr. L and his team at the Fetal Care Center of Cincinnati.

The next day the surgery went as planned and they were very hopeful that things would be better, they told me that after the surgery that if Diana was going to make it she was going to have to fight. The next morning they did an ultrasound and sent me to my hotel room for the week until I would have to go back for follow up tests. The following week when they re ran the tests they said that the girls had made almost a complete turn around and they sent me home on modified bedrest.

2 months later on Sept 13th I saw Dr. B again (at this point I had been seeing him every week) this time he told me that it appeared that they girls were headed into reverse TTTS and the panic began all over again he said he would call Cincinnati and get back to me. 3 short days later on Sept 16th Diana’s water broke, at first I was not sure what had happened other than I stood up and there was a huge gush of blood everywhere, I called my OB and he said to come in right away, when I go there they took me straight back to ultrasound where they determined that Diana was completely folded in half her tiny little chin touching her chest because her water had broken and I had gone into labor.

After what seemed like forever after my Dr, had checked me and the ultrasound tech had done the Biophysicals they rushed me across to the hospital (across the catwalk from the Dr.’s office) the immediately rushed me into a c section and put me under general anesthesia, my husband had not yet arrived at the hospital when they had taken me into surgery. It was during the C section that my OB realized that the girls were not headed into reverse TTTS but had completely turned around, baby A was now baby B etc, Elena was delivered first and 1 minute later Diana entered the world both girls were taken to the nursery to be stabilized and to wait for the transport unit from Charleston to arrive.

I remember waking up in recovery and looking out the window and seeing the sky go from grey to black almost instantly, I didn’t think much of it seeing as how it had rained all day. When they finally took me to my room they told me that the transport team was trying to decide whether or not to transfer the girls by air or by land due to the weather conditions. I was so groggy I still did not understand what was going on outside, when they wheeled me into postpartum my husband was there and he told me that my mom would stay with me at the hospital and that he would go to CAMC in Charleston to the NICU with the girls. 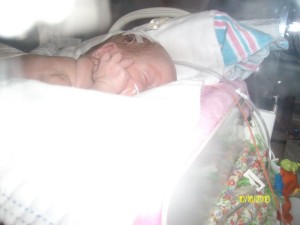 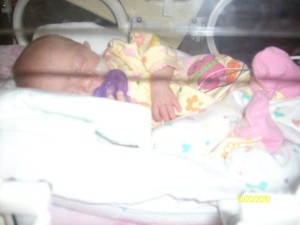 It was about an hour later on the news that it showed a tornado had passed through 7 towns across Ohio and West Virginia, one of those towns being 20 minutes from the hospital and that a man had lost his life trying to save his wife and their dog. It was a lot to take in all at once. 2 days later I was released from the hospital and went to Charleston to be with my girls, from then on it was at the NICU during the week and home and hr and a half away on the weekends. 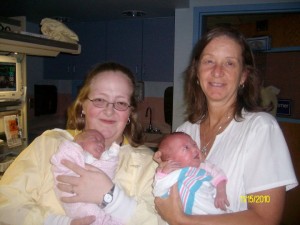 The girls spent 10 weeks in the NICU before coming home just before their first Thanksgiving. A month later a cold hospitalized Diana for 4 days. But here we are almost 3 years later and other than being developmentally behind i have 2 very healthy Identical Twin Girls, soaring over the obstacles that stand in their way on a daily basis. I have started writing a book about my experience with TTTS and my girls, I have started a March of Dimes team in their honor and have volunteered to help the TTTS Foundation in any way possible. I want to give back to those who helped me and my family get through a very difficult time in our lives, and to emerge stronger than ever and to keep fighting so that one day there will be a cure for TTTS. 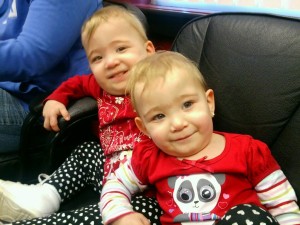