I could not let today pass without mentioning the 70th Anniversary of D Day. On June 6th 1944 the Allied nations landed bravely on the coast of Normandy, France, as part of Operation Overlord and began the offensive that would eventually lead to the defeat of the Nazis. 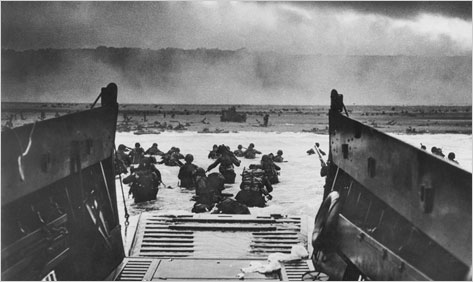 Most of us have seen “Saving Private Ryan” – and if you’re like me, just completely are awestruck at the bravery and absolute courage of those men. It was an impossible challenge – no advancing military unit wants to be coming at their enemy from a completely open position, with the enemy raining bullets down upon them. But the did it. Valiantly.

Many died that day on those beaches in France. And they were buried in massive cemeteries in Normandy.

I was lucky enough to visit Normandy with my good friend Lisa when we were living in Paris. We took a weekend trip and traveled around the region. It was on this trip that I believe I received my calling to join the military.

I remember the day so clearly. It was cold and windy. We toured Omaha and Utah Beaches, the D-Day Museum, and the Normandy American Cemetery. In a small chapel, as I stood alone and thought of the lives lost and the horrible price of peace, somewhere deep inside, I’m certain that was the moment I knew I would return home and join the military. 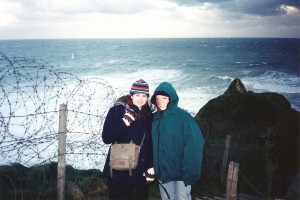 I wanted to share some of my journal entry from that day.

Lisa and I left the hostel and joined a group for a van-tour of the coast. The first place we went – Port du Hoc – still had all of the bunkers (underground) of the Nazi soldiers. Large craters are still all over the place from the bombing. The fact that the American soldiers scaled those cliffs, while being fired on, is so amazing to me. Judging from what I learned and saw this weekend, Spielburg’s “Saving Private Ryan” is quite accurate!

The tour of these places – Omaha beach, Utah beach, the cemetery – was all so amazing. We were enjoying ourselves so much, I often had to remind myself that we were in such a somber place. It was rainy, cold, and VERY windy – the wind literally picked me up off my feet once.

When we went to the {Normandy American} cemetery, I broke away from the group and walked alone. I did a lot of thinking. The monument is gorgeous, and there’s a small chapel in the middle. I have been searching for peace and nothing has been helping, but when I stepped into that tiny chapel, I found my peace. It overwhelmed me and I felt my burdens lifted. I knelt at the alter and and cried. Cried for these thousands of men who never got to go home. Cried for all the people who are fighting now, for whatever reason, cried for me.

In this moment, I became so very aware of the price for peace and the importance of freedom and democracy.

I took a reminder of it with me. I scooped (into a film canister) a little it of mud from the general area, and then I found a soldier from South Carolina – Sgt John L. Johnson – and I took some grass and mud from above his grave. I kissed his cross. I remembered him.

One thing that is nice about the cemetery is that all 9,000 or 30,000 or however horribly many graves are there, are all facing West – toward home. When Frederic (our cute little French tour guide) told us this fact, I nearly cried….

I wrote a bit more about our day, and then before I closed the journal entry, I wrote, “ps- I received my calling in the cemetery. I know I am supposed to go home and follow my dream of working towards peace between countries, governments, organizations – etc.”

I’m thinking about you today Sgt Johnson – and all of the others who fought bravely that day for peace and freedom.

Here are some pictures from that day in Normandy. 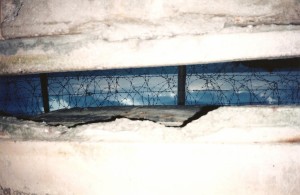 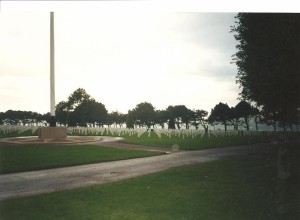