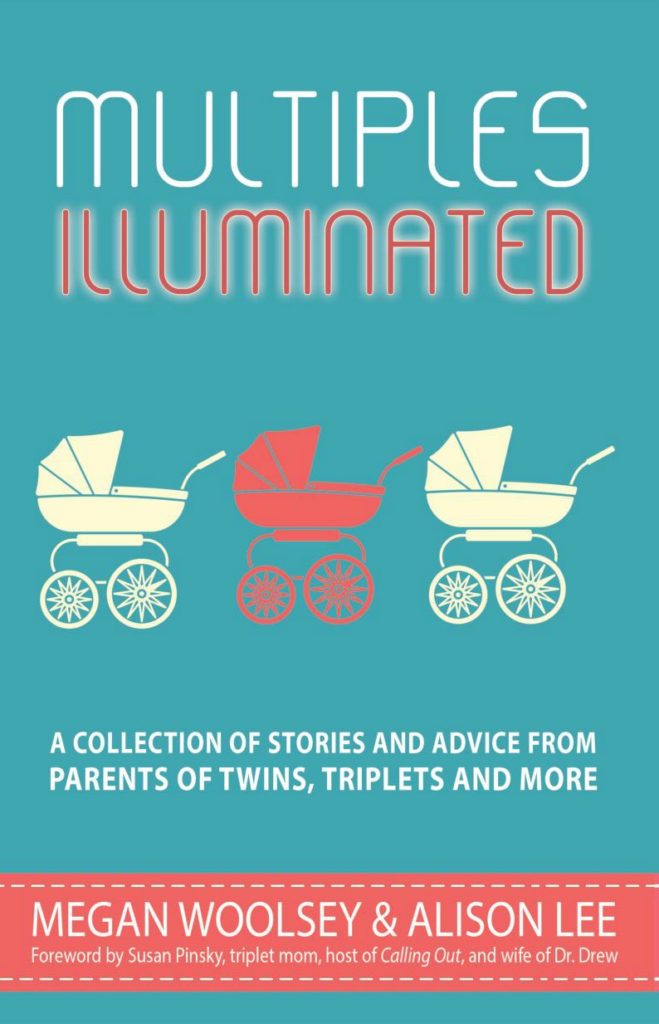 Did you just discover that you are pregnant . . . with twins, triplets or more? I remember EXACTLY the moment that the ultrasound technician told me there were TWO heart beats.

TWO? I had a just-turned-four-year-old and a 16-month-old at home, and this was a surprise I was NOT expecting. Not in the slightest.

Are you wondering how you will cope caring for more than one baby?

Well… you’ve got to check out this book. Multiples Illuminated dives deep into the world of raising multiples with beautiful stories and helpful advice.

In it, you will find essays on:

There is one downside, in my opinion. Twin to Twin Transfusion Syndrome is not covered in the book – I’ll have to work on that with Alison and Megan if they do another book. 🙂

Here is an excerpt from the book, to give you a little more of a taste of what you’ll find:

This is an excerpt of an essay Extreme Pregnancy by Eileen C. Manion from Multiples Illuminated: A Collection of Stories and Advice from Parents of Twins, Triplets and More. The recipient has permission from the publishers to republish this on their website for the purpose of a blog review.

The technician turned the monitor around so I could see the screen. With her index finger, she pointed to what she claimed were three fetal heartbeats. I remained unconvinced.

“I’ll get a doctor.” Maybe she was annoyed that I didn’t believe her.

She returned in a few minutes with a thin, elderly gentleman in a white coat. The two of them gazed intently at the screen.

“Those are the first triplets we’ve had since we got this new equipment.” The doctor looked impressed. Both of them seemed so pleased with the achievement of their state-of-the-art machine that they’d forgotten all about me.

“Can I survive this pregnancy?” I asked.

To me, he sounded very cavalier: what did he know about my health? He’d barely glanced at me in his intent pleasure with the hospital’s new technology.

“We haven’t had many triplets on the Island. Only two sets that I remember.” The doctor was still chatting with the ultrasound technician, leaving me to climb off the table and pull up my pants.

That question about drugs—she’d meant fertility, not recreational. No. I hadn’t taken those either. I was so convinced that I’d been rendered infertile by scarring from a bad case of pelvic inflammatory disease in the early 1970s that I’d stopped worrying about birth control several years earlier.

All that was running through my mind as I staggered out of the hospital to tell my partner, Norman, the news.

Since neither of us knew anything about multiples, we headed straight to Charlottetown’s largest bookstore and bought the only volume they had on twins and triplets. Most of the book was about twins; all sorts of studies had been done on twins, but triplets? Not much. It occurred to me that there just hadn’t yet been enough of them for psychologists and other researchers to study. Twins often appear in myth, fiction, and fable, but triplets?

After I’d read enough about the risks of triplet pregnancy and premature birth, I surmised that before the existence of modern neonatal ICUs, not many triplets survived to make it into myth or fiction or history. Unless you count the Fates, or the Trinity—God as triplets?

When friends heard news of my extreme pregnancy, they were amused by the cosmic joke. I was probably the least kid-savvy person in my social circle. Whenever colleagues had children, I always offered to babysit to help out the new parents, but none ever asked me to do it more than once. I took this as a sign of my ineptitude. In truth, I was frightened of babies. They seemed fragile, unpredictable, and smelly. You couldn’t discuss novels with them or even gossip, so my limited repertoire of social interaction was useless.

Having multiples is one of the most wonderful and challenging experiences you will have in your life. Whether you’re expecting multiples or a few years into the multiples club, you will find stories you love in Multiples Illuminated.

Where can you find the book?