November 8th.  One year ago today I was anxiously awaiting my weekly appointment to see Dr. Browne.  I was just over 26 weeks pregnant with the girls, and the week before had not been a good appointment.

I reflected on what the doctor had told us at the last appointment.  Kathryn was getting worse each week.  The fluid continued to build up in her little body, her heart was not pumping well, the entire right side was not functioning, her lungs were not growing because the fluid in her belly was taking up too much space.  It seemed like there was very little we could do to help her.  No Antidote.  No magic solution.  And I felt like we were just waiting for her to die.  Twin to Twin Transfusion Syndrome (TTTS) was killing my babies.

At the same time, the little twin, Baby B was growth restricted, not growing quickly at all, and still only the size of a 22 weeker even though we were at 25 weeks.  Although she still maintained a visible bladder (great sign) and had just about 2 cm of amniotic fluid in her sac, she was shrink wrapped, meaning that the membrane separating the two babies was literally wrapped around her like saran wrap.

At the 25 week appointment, Dr. Browne told us about the options to consider.  Option 1 – the next visit we could do another amnio reduction, removing some of the fluid from Kathryn’s sac to make more room for Baby B and to relieve the pressure on Kathryn.  He would probably also draw more fluid out of Kathryn’s belly.  This always caused a risk of pre-term labor, and at this point, neither baby was likely to survive.

Option 2.  We could choose to go to the Children’s Hospital of Philadelphia (CHOP ironically) and have the cord ligated to Kathryn, terminating her in the hopes that it would allow Baby B to thrive.  I immediately and emphatically told him that this was NOT an option I would be willing to consider.

We left the doctors office feeling so heartbroken.  Now, a week later, we were going back, and I was full of hope that a miracle had occurred and that both babies would be doing well.  I could still feel lots of movement and activity, but I could not tell if I felt one baby or two.

I packed a bag and took it with me this time, in the hopes that I would not need it.  The last two times I was hospitalized I had been completely unprepared.

We arrived and waited.  We were called back by a different sonographer.  Dr. Browne had been called to an emergency at the hospital, but she was going to go ahead and go through the weekly routine.

As she was going along, I was relieved to see that Kathryn was still active and happy as could be, moving around, with a good, steady heartrate.  Baby B still had a visible bladder, she had grown just a little bit, but her fluid levels had dropped under 2cm.  And the sonographer threw out some new terms I hadn’t heard.  Something about her dopplers not looking good, and something about the end flow…

She left to call Dr. Browne, and upon her return, told us that Dr. Browne wanted me to meet him at the hospital for admission.  Again.  This time, it was for the little baby.  I was scared.  My husband was scared.

I was admitted to the Labor and Delivery ward for the 3rd time of this pregnancy.  It would be the last.

On the afternoon of November 8th, I will never forget Dr. Browne standing at the foot of my bed, explaining to me that he admitted this time to have the babies.  The biggest issue was that Baby B developed Reverse End Diastolic Flow.  Basically, her fluids were not pumping to her as they should be, and sometimes were even going in reverse.

Baby B was now in charge.  They would continue to watch her, and she would determine when we delivered.

So, I was hooked up to the heart rate monitors, which was such a lengthy process because Baby B was so small they often had a difficult time finding her heart rate, and Kathryn had so much fluid that her heart rate resonated everywhere.

They hooked me up to an IV, gave me another dose of lung surfactant steroids, and then we waited.

And what happened next really was a miracle.  The babies both stabilized enough for me to continue to remain pregnant.  Each day pregnant at this stage was a blessing.  Each 24 hours in the womb equaled approximately 1 week in the NICU.

Hours turned into days.  Days turned into weeks.  I would lay in that bed for 32 days before the babies decided they were ready… leaving my 4 year old and my 20 month old and my husband to fend for themselves.  Except something else happened.  My family and friends showed us how much they loved us.  You can read about my Gratitude to them.

But November 8th will always be a day of significance to me.

It was also the beginning of 32 days that I was able to enjoy my Kathryn, listening to her heart beat, watching her on ultrasounds, feeling her move about, talking to her.  For that, I am very Thankful. 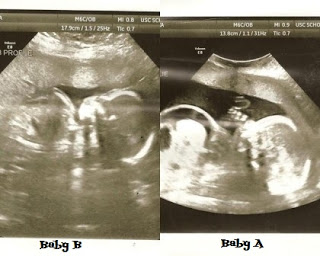 This ultrasound was taken on 10/14/11.  Kathryn is on the right side.  The black that you can see inside the white arc (left side of the image of Baby A) is the fluid inside her abdomen.  You might notice she is sucking her little thumb.  (right side of the image is her head, thumb in mouth.)  You can see that Baby B already had significantly less fluid around her and is looking a little squashed.