It’s the 12th, and if you know me or have been following me awhile, you know the 12th is the monthly reminder of losing my daughter, so today I want to think about happy things.  And what makes me the happiest?  Telling about the silly things my munchkins do!

I always said I would never be one of those moms who just talks non-stop about her kids.  Well, that lasted about 10 minutes into motherhood.

We all know that kids say the darndest things! Mine keep me laughing all of the time.  Here are some of my favorite quotes I wanted to share.

JB: “Kahn I bite it?”  (she used to say can pronounced kahn and anytime she wanted to try something, she would ask to bite it!)

JB: “Once upom a time… and then there was a princess!”

JB: “Mommy, your butt is waaaaay bigger than mine!”  (thank you so much my darling!!)

JB: “JB toot toot!  Excew me somes mommy!”  (I loved it when she said Excuse me like that!)

For awhile there, she was scared of everything.  I’m not sure she knew what it meant.  We saw bunnies in the yard one night, and the next night as we pulled in the driveway she said “Bunnies!  Scared!”

Now that she is almost three, she is talking so well and doesn’t say most of these things anymore, but she is still hilarious!

NB came home from 3 year old daycare one day and announced to me “Mommy, we don’t say ‘What the hell?!!’ at school!”  Nope, nope you’re right.  Good job on that one mommy!

NB: (placing his hands right on my boobs when I was pregnant with the twins’): “Are these the babies’ heads?”  STILL laughing about that one!

NB: “Mommy when the babies are born, are you going to spit them out like you did me and Jelly Bean?” (someday we’ll have to fix that assumption!)

NB: Recently our neighbors showed up wanting to see the puppies.  Huh??  Apparently NB told them we got three new chihuahuas!  NO!

NB went through a (very long) phase in which he (and his cousin who is the same age) thought it was hilarious to throw random words into a sentence, or just blurt them out.  Their favorite words were:  PANTS! and EYEBALLS!  You were sure to hear one of those words in about every sentence, followed by a lot of giggling.

NB: He calls his boy parts a wenus.  I guess there are worse things he could say.

And most recently the sweetest thing he has said, completely out of the blue:  “Mommy, I wish Kathryn was here.  We were supposed to have two babies.”  Yes honey, we were…

I’m glad that I wrote these down.  It actually took quite a bit for me to recall some of them.  I know both of them have said and done a ton more hilarious things!  When I went to work, I would tell my co-workers daily accounts of the funny things they said and did.  And yet, I am already forgetting them!

I am so blessed to be able to spend my days with my munchkins!  And as Tiny grows, I am sure I will fill the pages with anecdotes about her as well! 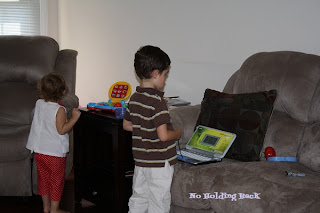