All Things Are Possible with God…

Really, this would be the last verse in which I would expect a mother, who just lost her twelve-year-old son, to find comfort.

On September 8, 2011, Anna sent her two children out to play, but only her daughter came back. Three years ago today, she unexpectedly said goodbye to her son Jack…

I met Anna when I was a brand new blogger. Turns out we had something in common. We both were grieving our child. For me, it was my daughter Kathryn, who died after two days. For Anna, it was her beloved son Jack. He passed away in an accident no one could have foreseen.

When I began to collect writers for our book for grieving mothers, Sunshine After the Storm: A Survival Guide for the Grieving Mother, I wanted Anna to be a part of it. I had been following her blog, An Inch of Gray and I knew the powerful voice and amazing ability to reach her readers that Anna possesses.  I could not think of a better writer to include for the chapter on losing an older child. Anna agreed to participate, but she also shared with me that she had just been picked up by a publisher to write her memoir about sweet Jack.

I was thrilled for her. The day that she messaged me and asked me to be one of her “readers” was one of the best days for me. It meant so much to me that Anna, this gifted writer, speaker, and just amazing woman, wanted me to be a part of her inner circle.

The book, titled Rare Bird, arrived and I hugged it closely. The cover was perfect. I knew it would be a difficult read. But I also knew it was a book I desperately wanted to read. How often do we have the opportunity to climb into the mind and emotions of another person who has experienced a trauma similar to one you’ve gone through? 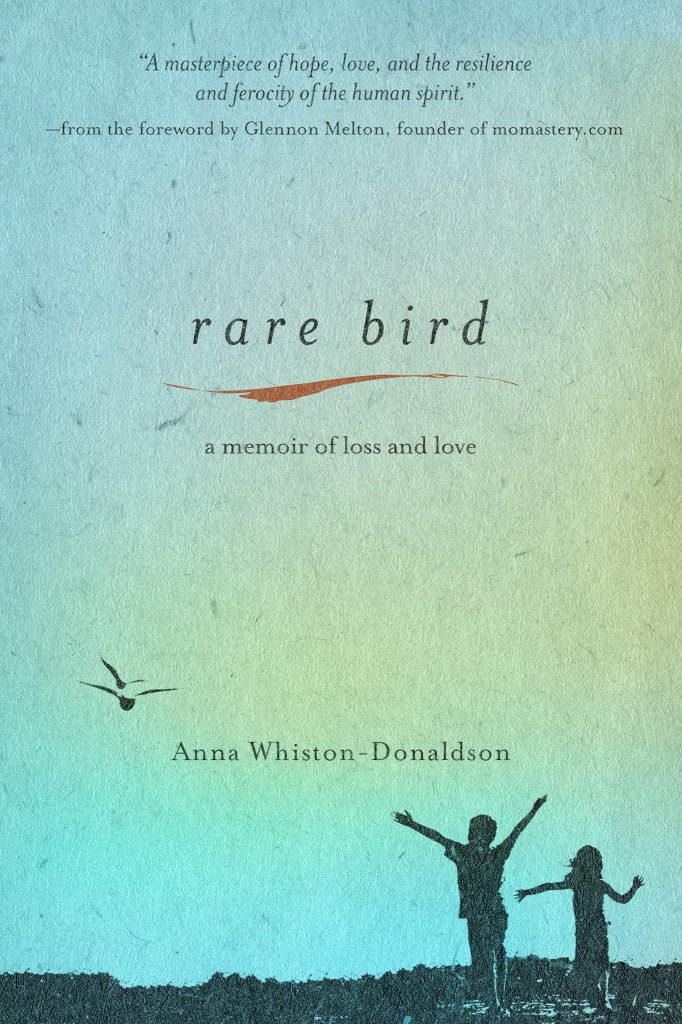 But more than that, I understand tremendously the need to share our children with the world. To keep their voice alive. To let everyone know and remember that they were here. And in Jack’s case, he touched so many people in his short life, and through this book, he’ll touch thousands more.

From a pure “review” perspective on the book – 5 Stars all the way. Anna’s writing is so moving. I saw and lived the events of that day, and as the family learned to survive in a world without Jack, I grew with them; almost as if it had happened to me personally. In fact, because I have a seven-year-old son who reminds me of Jack in many ways, there were times I had to walk away from the book, because it hurt too badly to continue in that moment. Legos…. oh, the legos.

BUT… grief is not the entire story.

I remember telling a friend of mine, who has a ten year old son, about the book. She said she would be scared to read it because it would hit too close to home. I encouraged her to consider it anyway, because grief and sadness are only a part of the story.

As I read the book, I learned how to be a better person, because of Jack. His life philosophy and attitude were amazing for a young boy. He lived by this mantra: 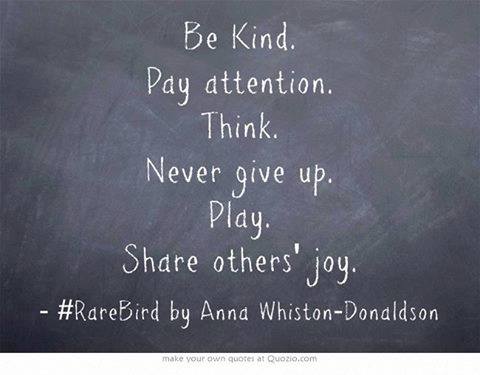 Also, this is an incredible story of hope, belief, faith, and forgiveness.

It is a story of learning to pick up the pieces and pull your life together again after a tragedy.

Here are some of Anna’s words:

It’s clear in the early aftermath of Jack’s death that Tim, Margaret, and I
will handle our grief differently. If handle is even the word. Endure? Approach?

A day or two after the accident, Tim and his dad sit out on the screened porch playing cribbage in the warm weather. I know men like to be doing something, instead of just sitting around talking. But playing cards seems off to me. Like the day after the funeral when Tim, his parents, and his brother go into Washington, DC, to visit museums and see an IMAX movie. Within a week Smithsonian magazine shows up in our mailbox.

“Did you order this?” I ask Tim, pulling it from the massive stack of sym- pathy cards and Jack’s latest Lego magazine.

“Yeah, if I became a Smithsonian member, our movie tickets were cheaper,” he says. I drop it on the kitchen table like it’s a viper. I can’t picture going to a museum, let alone comparison shopping for a deal on movie tickets, at a time like this. I’ll throw the magazine in the recycling bin each month when it ar- rives, annoyed that it represents one more difference I’ll have to learn to navi- gate in our new lives. It quickly becomes clear to me that Tim needs distraction and activity.

I’m not surprised by Tim’s and my differences in grief, because we’ve always been different. I am outgoing and irreverent, a fast talker prone to over- sharing and laziness. I am a noticer of details and people. I can tell when someone feels left out or needs a hug, and I still remember what my best friend wore to school on the first day of eighth grade. Tim is introverted and quiet, a structured, steady hard worker who avoids crude humor and gives people the benefit of the doubt. He’s not good with names or faces but is always modest and kind; his booming voice and big laugh come as a surprise when he does decide to speak.

I especially liked the fact that Anna was not afraid to get real in this book, and share the very personal experiences and challenges that their family had.

We’re so different that when we try to fold a blanket together, I’ll ask myself, How would I fold this? and then do the opposite, knowing Tim’s approach to absolutely everything is the reverse of mine. Don’t even get me started on how he loads a dishwasher. Why wouldn’t we be so different with handling grief?

I am infinitely grateful for one way in which Tim and I are different. He does not blame me for Jack’s death. I mean, I will always be the one who let the kids play outside in the rain. It’s hard for me to understand how Tim could ever forgive me for that. I’m afraid that if the tables were turned, I would be poisoned against him forever. But when I apologize, over and over, he looks at me as if I’m crazy to even say “”m sorry.” He offers up to me gra­ cious words that I barely believe, but that I must accept in order to survive and ever be able to look him in the eyes. “How do you know I wouldn’t have let them play in the rain if I’d been home?” he says. “It could have happened to anyone.”

Margaret’s first reactions to her brother’s death remind me so much of myself when my mother died. Smiling, achieving, moving forward, but hurt­ ing on the inside. She can easily say Jack’s name in conversation and spend hours looking at his photos and drawings, but she doesn’t cry, and her feelings about the night of the accident are off-limits. She is resolute in her refusal to speak of it. It’s as if she does, she will shatter into a million pieces.
——–•
A few weeks after the accident, Margaret becomes anxious. She’s afraid of get­ting sick, being robbed, kidnapped, or dying. And any sign of discord stresses her out, even if Tim and I are just talking about our schedule for the week or debating if Shadow needs to go out to pee. I think it’s just one more way she doesn’t feel anything’s certain anymore. A simple cough could be whooping cough. One beer could be the path to alcoholism. One argument can lead to divorce. If Mom starts to cry, what if she can’t stop? And Margaret doesn’t have her best friend to share the burden with, because he’s the reason she found out about the uncertainty of life in the first place.

I stopped reading the book with about four chapters to go. It took me a few weeks to come back and finish it. Not because it was not riveting. Not because I didn’t want to read it. But because I knew I would finish the book and realize it had not just been a bad dream. Jack was gone.

But I am glad I went back and finished it. Because Anna ends the book on such an encouraging note:

‘For nothing is impossible with God’ We are proud of you, Jack, and we love you very much.” He’ll smile an embarrassed smile, and I’ll hope he hears, really hears, how proud we are of him. I’ll give his shoulder an extra squeeze and steer him back to our seats.
As we twirl our pasta and bite into our breadsticks, we cannot know that three months later our son will indeed be flying on his own, not to middle school and the blossoming independence we had envisioned, but to someplace entirely different. And that in exactly three months, we would need to cling to his special Bible verse more than he ever did. 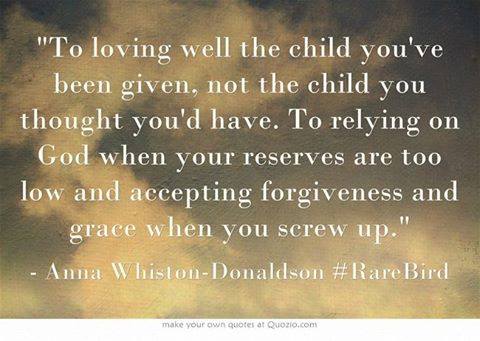 Rare Bird  is available on Amazon and will be available everywhere tomorrow, September 9, 2014.

Thank you Anna, for sharing your world and experience with us. I am forever changed. 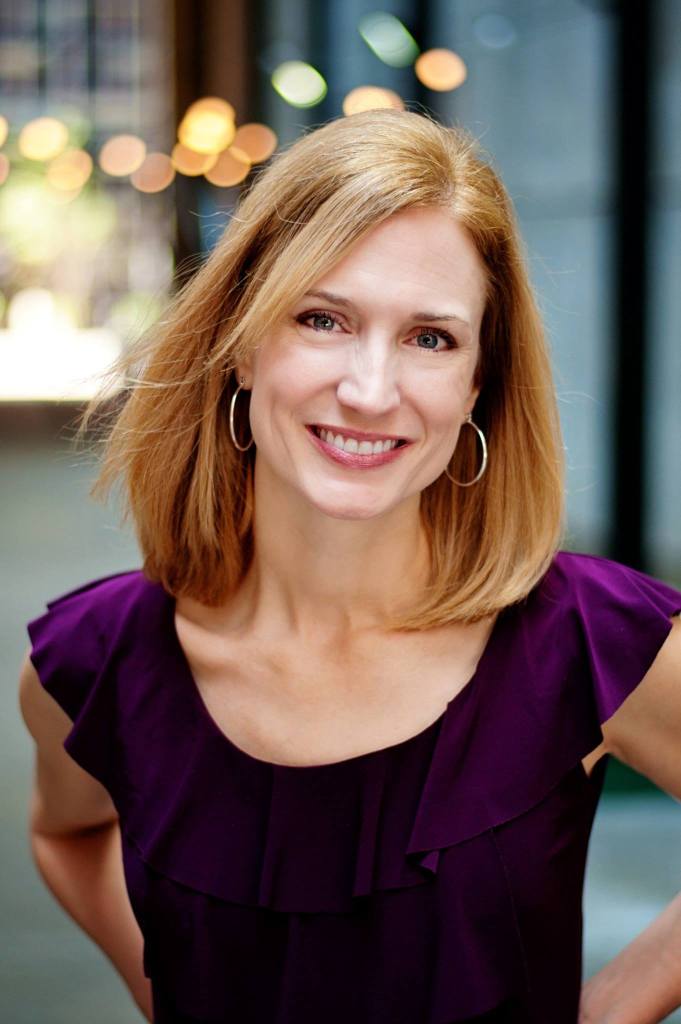 Possessor of roots perpetually in need of a touch up, Anna lives with her charmingly imperfect husband and adorable daughter. Her nest is feathered with found objects in need of love. She is a dabbler, skilled in no particular area, but she strives to do more good than harm and live a life of simple faith. Some days are better than others.

Find her at an Inch of Gray.

Find out more about Rare Bird at Anna’s author website.