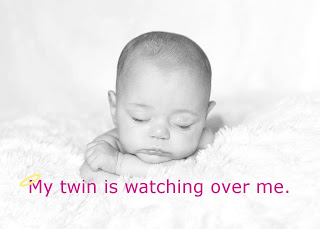 Do we ever get over infant loss?

Big green eyes look at me curiously as I stare off into space, daydreaming of the little girl I see in my dreams. Her long brown hair blows in the wind as she romps around a field of daisies, waving at me and smiling! “Hi Mommy!” she calls to me. And off she runs to chase another butterfly. My Kathryn.

Her identical twin sister is still here with me. She rubs her hand on my cheek and smiles. Does she miss her sister? I wonder if she’ll ever feel the loss as I do. Will she feel cheated?

Infant loss. A club I thought I’d never join. But I did.

The whirlwind of rapid change over the last 18 months left me breathless. Within two months of deciding to leave the work force and stay home with my then 4 year old son and 15 month old daughter, I found out I was pregnant. A few weeks later, we learned it was identical twins. Just as we were adjusting and growing excited about this new adventure, we learned the babies were sick, quite possibly already dying from a disease of the placenta that affects identical twins – Twin-to-Twin Transfusion Syndrome (TTTS). Hospitalized three times, the third time for five weeks, we watched and waited, waited and prayed. Would our daughters survive? The odds were not in their favor.

At 30 weeks and 5 days, the babies decided to arrive. Baby A was tiny, at 1lb 10 oz, but we were overjoyed to hear her soft, but audible cry. She was whisked off to the NICU. Her sister made no sound. She was 4lb 5 oz, but a large deal of that was extra fluid because she had developed hydrops fetalis. The TTTS caused her body to receive extra fluids but her heart could not efficiently pump all of the fluid through her system, so the fluid began to pool around different organs – namely in her abdomen and her heart. Kathryn (Baby B) was not breathing. She was immediately resuscitated, intubated and followed her sister to the NICU. At that time, I thought we had made it through the worst, and we would be OK.

For weeks in the hospital bed I had prayed and hoped – if they can just be born alive, they can make it!

Sadly, even in this day and age, there are still mysteries the medical community cannot solve. Pregnancy and infant loss still is high, in our country, and around the world. Despite medical advances. For two days the doctors and nurses tried to raise her arterial blood pressure, but her cells just continued to leak the extra fluid. And after 52 hours, she breathed her last breath in my arms.

A beautiful, perfect baby. Reclaimed by God. She changed my life. She made me better.

At some point during those 32 days that I lay chained to the heart rate monitors in the hospital bed, my heart was changed. Anger, self pity, fear… eventually gave way to calmness. Although the grief gripped my whole being in a way that still can occasionally drop me to my knees, I also feel blessed. So blessed that I was able to see, hold, and love my daughter. So blessed that even though she was so sick for ten weeks, we believe she continued to hold on until her sister was big enough to survive if born. Blessed that despite an 84 day stay in the NICU, her twin is healthy and thriving.

But I will never see the world the same again. I have been forever impacted by infant loss. I do not take for granted my three babies on earth, even though I continue to grieve for my daughter in Heaven. But until I can hold her in my arms again, I will daydream of my Kathryn and her meadow of butterflies.