Probably the funniest story I have of my sweet boy happened when he was about five years old. He was just old enough that I was allowing him to run back and forth between our neighbor’s house on his own to play with the neighbor, who was also five.

But, here’s the problem. As we’ve established, my son is ADHD. It was not diagnosed at the time, but I had my suspicions. I had observed how he could hyper-focus on activities to the point that he had absolutely no awareness of anything going on around him, which I later learned is a common trait for ADHD children (and adults). As an example, he would get lost so deeply in play that he either ignored or was not conscious of the fact that he needed to go to the bathroom until he had to go so badly that he occasionally had an accident.

That’s important to this story.

Another important fact to this story – he could not read or write yet. You’ll see where that becomes key in a minute.

So, here’s how it all went down.

It was a hot afternoon not long after kindergarten started. The boys were out playing back and forth between the neighbor’s house as they do. Shortly after five or so, my husband came home from work. He walked in the front door, gave me a really puzzled look, and proceeded to ask me why there was a human poop out in our front yard.

I thought that was a really strange trick to try and pull, even for his weird sense of humor, so I went out to investigate. Sure enough, right there in the front yard it sat. A giant turd.

About that time, Bug comes running back to our house.

“Bug,” my husband asks. “Did you poop in the front yard?”

He shook his head back and forth. “Nope! Owen did.”

My mouth dropped open. “Owen did? Are you sure?”

“He DID?” my husband asked, incredulously.

“Well, what did the note say?” I had to know! Mind you, we both know my son and his friend are in Kindergarten and are not really reading or writing yet. 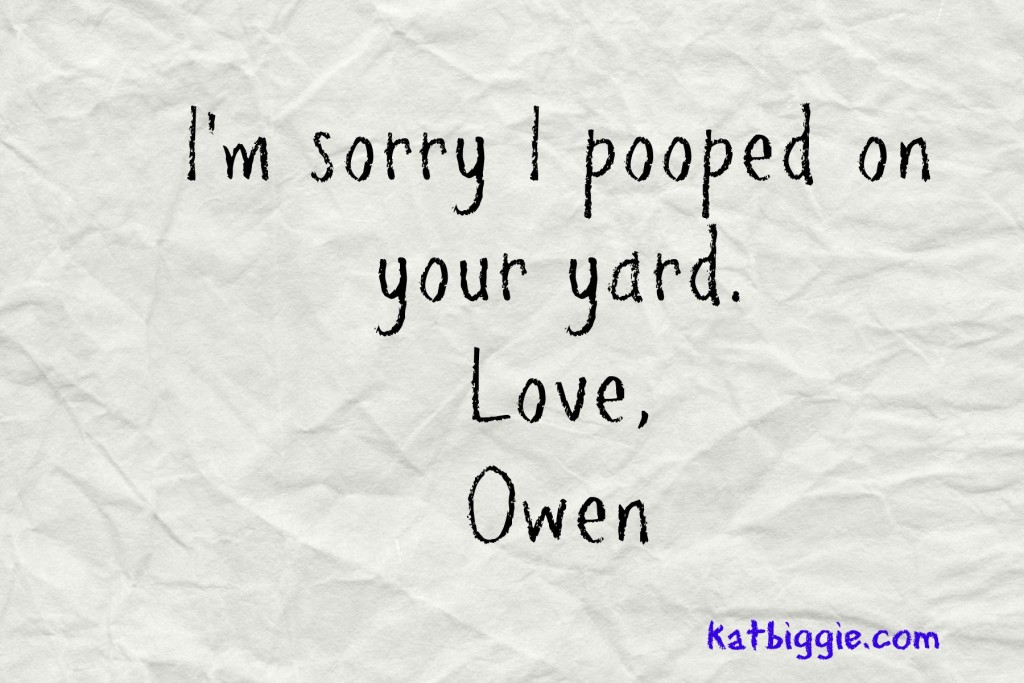 By this time my husband and I were both trying to suppress giggles. I mean, you have to give it to him, he’s creative. A little worrisome that he can come up with a story that quickly, but he isn’t lacking in imagination.

Of course we both knew Owen had not pooped in our yard and we were able to pry the truth from Bug. Just as I assumed, he got too wrapped up in play, realized he needed to go, and just couldn’t quite make it back in time. We took the opportunity to have a conversation about honesty and about not blaming others, and of course, about not pooping in the front yard.

It’s been three years, and we still laugh over that story. Thankfully, no one has pooped in our yard since.

What crazy stories has your child made up when trying to hide the truth?

Come #LosetheCape with us! Available on Amazon. The perfect book for ALL busy moms!