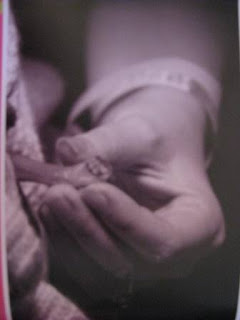 The nurses dressed them in adorable matching white dresses with pink hats and wrapped them up in blankets.  They were baptized, held by both grandmas and one of their grandpas, and an aunt.  We were able to keep them with us for 24 hours; the most rewarding, amazing, sad, and heart wrenching 24 hours of my life! 24 hours I will cherish forever!  A few days later they were buried in the cemetery behind the church were we were married, next to my husband’s grandparents.
Now what? I was frozen time. I couldn’t do anything; I wasn’t supposed to be doing anything. I was supposed to be pregnant, I was supposed to be on bed rest, I was supposed to be wearing maternity clothes. I was stuck. I cried harder then I ever knew I could cry; I cried more then I ever knew I could cry. What are you supposed to do? Where’s the guide book? I believe I had a choice, I could stay right were I was, or I could move forward. (I hate the term move on, I’d never move on from this.) I made a goal for myself; Do one thing each day; go visit my dad, cook a meal, work on my baby book for angels, write a thank you; Just 1 thing. Put one foot in front of the other and see where it leads.  Little by little I started to be able to do more.
At one point during that first month after losing the girls, I stumbled across a quote. “There is no foot so small that it cannot leave an imprint on this world.” YES!!! That was it! That was my girls! I was madly in love with their amazing, little feet.

Their lives needed to mean something, they needed to be remembered.
Other people needed to know about TTTS! I drew inspiration from other TTTS angel moms that I had connected with on Facebook.  Somehow, they had turned their grief into something powerful.  They had taken something so sad and made it positive.  As I lay in bed one night in tears, it came to me: The Catherine and Hattie Photo Challenge. I wanted people to say and write their names and talk about TTTS.  Knowledge is power.  The whole world needs to know about my girls and their courageous battle!
I stayed awake for hours thinking of how this could work.  My tears turned into a smile. Man, did that smile feel good. I was able to remember my girls with a smile! I was on to something; something that could be big, something that could be powerful.  The next morning I sat down on my computer and started typing. It poured out and my thoughts and the words came out perfectly.  I posted the challenge to my two TTTS groups on Facebook. Within minutes people from all over the US had responded to the idea. Go little feet, go! Then people from other countries started to respond to the idea.  Then I emailed friends and family who knew our story. Within a few days pictures started to come in. Each time I got one, I smiled a big smile (and maybe cried a few tears).  My girls were telling the world about TTTS. How cool is that?
I was not at a place where I was able to share our story with all of my Facebook ‘Friends’. I had also decided when I started the Photo Challenge that it would run for a year.  For their 1st birthday, on June 8th, 2013.  I will pull all of the photos together to put into a book in their memory.  6 months into it I have received around 200 photos from Italy, Australia, Japan, Puerto Rico, England, France, Canada, Hawaii, North Carolina, New York, Georgia, Las Vegas, Wisconsin, and many other places in the USA.  Every time I get one I know that someone has thought about Catherine and Hattie, and I can’t describe what a great feeling that is!  My girls and their battle with TTTS have changed the world, one picture at a time.
“No foot is so small that it cannot leave an imprint on the world” – literally J 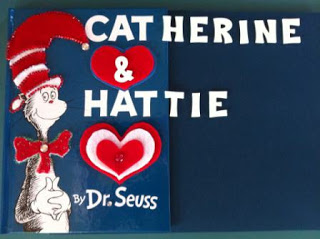 My Angels
–Emily Farwell
Do you believe in angels? I do! And here’s why…
When our identical twin daughters, Catherine and Hattie, were born sleeping at 21 weeks on June 8, 2012, I was so devastated that I needed to believe in something, anything.  They were so tiny and so perfect, simply too beautiful for Earth. There was not a doubt in my mind that they were in Heaven. They were the newest, teeniest, tiniest, most beautiful angels to reach the pearly gates. I had to believe in something; I had to believe they were somewhere if they couldn’t be here with us.  So that’s what it was, a belief in something wonderful, a place that was wonderful enough to have my babies.
As I sat at the cemetery preparing for their funeral a little boy from my kindergarten class was undergoing experimental brain surgery. I know teachers aren’t supposed to have favorites, but what can I say, this little boy Giovanni (Gio) is definitely one of my favorites.  He suffers from an extremely rare seizure disorder, which causes him to have over 80 seizures a day!  The seizures were so sever that they caused him to be non-verbal and on the autism spectrum.  But all of that being said, he is an amazing boy with the most beautiful eyes and charming personality to match.  Because the seizures had become so bad and his quality of life was dwindling, the decision was made for experimental surgery.  That day his family and I talked to my angels all day.  They needed to help him get through this; they needed to guide the gentle hands of the surgeons!  We needed all of the help we could get for Gio!  The surgery seemed to go okay, but now the waiting game began to see what the true outcome was.  He would be in the hospital for weeks being closely monitored.
A week after he was released from the hospital I went to his house to watch him for a few hours.  He was his quiet charming self, but a bit different.  From the first day he walked into my room, I knew that he is a smart and inquisitive guy.  He was my first student to know that I was pregnant after all!  He used to put his hand on my belly, grunt, and smile at me, as if to say, “I know that you have a secret in there.”  He even knew before any of the adults at school knew! But how would he react to me not being pregnant anymore? Would he even notice? How do you explain such a sad thing to him, or do you even try to? I was full of anxiety not knowing what to do, so I didn’t do anything. I walked into his house as he squealed and ran over to me; maybe I’m one of his favorites too. J
Anyway, after I was there for a little while he brought a book over to me and sat on the couch, as if to say, “Hey come and read this book to me!”  So we sat there next to each other; I read. He listened.  All of the sudden he touched my belly and looked up at me with the most curious brown eyes.  I simply said, “Gio, the girls are in Heaven.” His expression turned to confusion.  I said, “You know, they’re angels, the ones who were with you during your surgery, the ones who helped you and your doctors.” He gave me the biggest grin I had seen in months, a grin that said, “Oh ya, those girls, that’s who they were. Of course I know they were there with me and they helped me the whole time!”  I was speechless! I sat on the couch stunned, fighting back tears, not able to move! Did he really see them? Were they really there helping him?
Well, next came my proof. He reached up and held onto the pendant on my necklace.  My mom had bought me a necklace with a pea pod that has two peas in it, just like our identical twin girls.  He held it gently and gave me that same amazing smile again. Yup! There was my proof. Angels DO exist! They are there to help us when we need them, to watch over us, and give us strength. Our babies are okay!
Hopefully this story helps you believe too. Heaven does exist and it is filled with little angels!
Each click equals one vote for me!