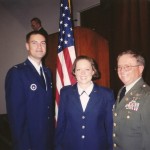 On June 28, 2001, I was commissioned as a 2nd Lieutenant in the United States Air Force. After 12 long weeks of Officer Training School, which seemed like a lifetime back then, we were finally real people again. I had no idea what the world would bring in the upcoming months. September 11, 2001. Wars. […]