I’m so torn between wanting to go to bed right now and wanting to just write, write, write about a place I belong. As a friend’s husband said tonight, at the end of the day, that’s what we are all looking for. I believe he is correct. 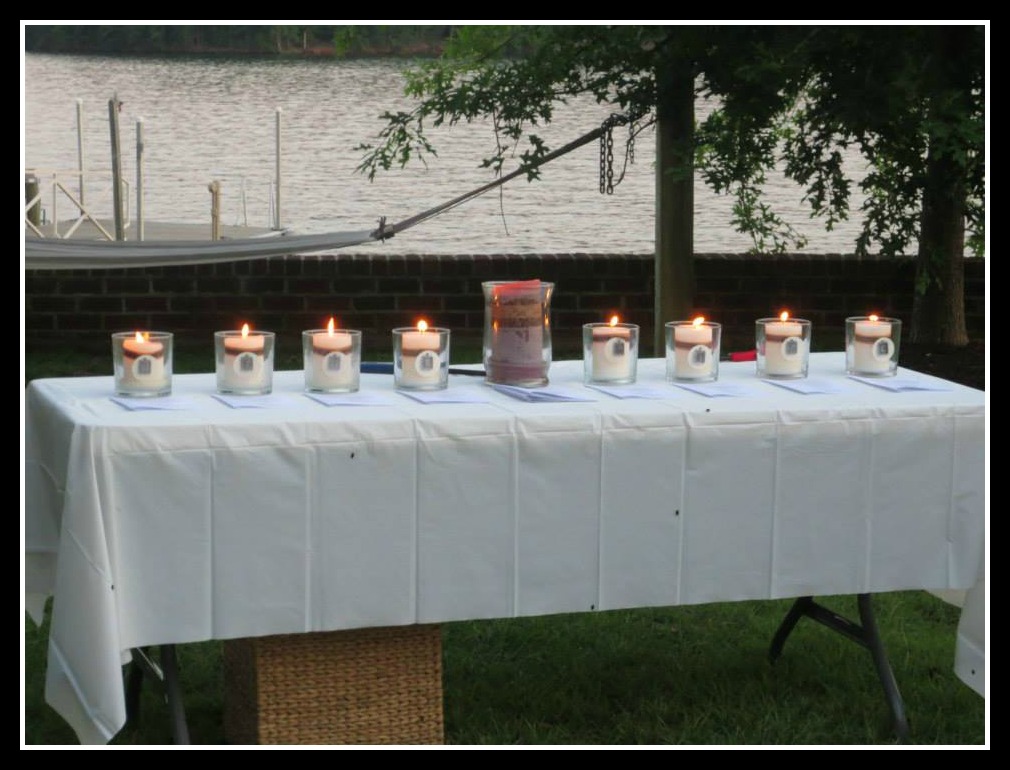 Candles we lit at a Remembrance ceremony this summer to remember all babies lost too soon.

My heart is full. My mind is racing. My eyes, however, hurt!

Tonight was the monthly gathering of the grief and loss support group that I belong to, Naomi’s Circle. Naomi’s Circle is a gathering place for parents who have lost babies during pregnancy (through miscarriage or stillbirth) or during the first year after birth, and although it took me over eight months to finally decide I was ready to find a group, I am so glad I did.

A Place I Belong

As is always the case when I leave this group, my heart and emotions and brain are all just a churning. I have so much I want to say and do. I’m recharged.

Strange feelings to have coming from an environment in which we all just poured our hearts out and talked about the saddest thing that has ever happened to us.

But those are not the emotions that permeate the evening. Instead, I leave feeling embraced, encouraged, hopeful, loved… it is a place I belong.

Each month as I share my story with the group, I realize that I still have so much repressed emotion that I push back in the day to day happenings of life. In this room of women who know and understand my pain, I find myself spilling out feelings that I’m not sure I even realized I had until that moment. Some are things that I am just afraid to share outside of my group because I don’t know how they will be received (or misunderstood) by other people.

I shared tonight that I feel a lot of jealousy toward other mothers of twins. (Ironic since my friend was sitting right next to me, and she is the mother of 2 year old identical twins! Doh! I quickly told her I don’t feel that way towards her!) I think this jealousy is part of the reason that I make sure to tell everyone (whether they want to know or NOT!) that Tiny is a twin… but her twin died after two days. I tell them this because I want them to know that I AM the mother of twins.  This results in many awkward situations as most people do not know how to process that kind of information, but I just have this overwhelming need to let people know I have twins. Even if I don’t have both of them to show. I have developed my own twinless twin syndrome!

On the other hand, I also have this urge to surround myself by people with twins, because that’s where I should I fit in and belong.

But I do belong with the loss mamas. Before I found out about Naomi’s Circle, I did not have a place I belong.

Losing my daughter changed me. In so many ways. I feel like I struggle to fit in in many situations now. (I think this is part of the reason that I love blogging so much. I have discovered a whole world of weirdos that like typing away on their computer as much as I do! 🙂 No offense to the other weirdos, I love you dearly!)

I also find myself seeking out other mother’s who have walked this walk.

Because with them, I know I will not be judged. I know that my kind of “crazy” will never seem crazy to them. I know that I can laugh, I can cry, I can say all the things no one else wants to hear or listen to. And I can provide the same for them. We are instantly bonded. Part of the “Sisterhood” of loss.

Tonight was a special night with the group. A very kind district manager of the Olive Garden happened to get into a conversation with our group moderator’s family a few months ago, and by the end of the night, offered to provide dinner for our next Naomi’s Circle meeting. The husbands were invited and childcare provided. Dinner was amazing, thank you to the Olive Garden!

We gathered together and each of us, husbands and wives, had an opportunity to share.

Men and women grieve so differently, and it was truly wonderful to share like this. I know my husband learned some things that I had not shared with him, and vice-verse.  As our moderator’s husband spoke to us, he explained why he saw value in attending from time to time. It gave him a window into the depth of his wife’s suffering. He also realized how important support and being accepted into a group where we belong is so very important.

The losses are so different in the group. Some women have lost as many as five babies. Some only one. Some as early as 4-6 weeks, others lost full term babies, or in my case, two days after birth. But the pain is the same. We are all looking for understanding and comfort.

If you have had a loss and have not tried to find support, know that it is never too late to seek out groups like Naomi’s Circle.

Do you have a place you really feel you belong?