Co-sleeping…. One of the hottest topics amongst mothers of young children… 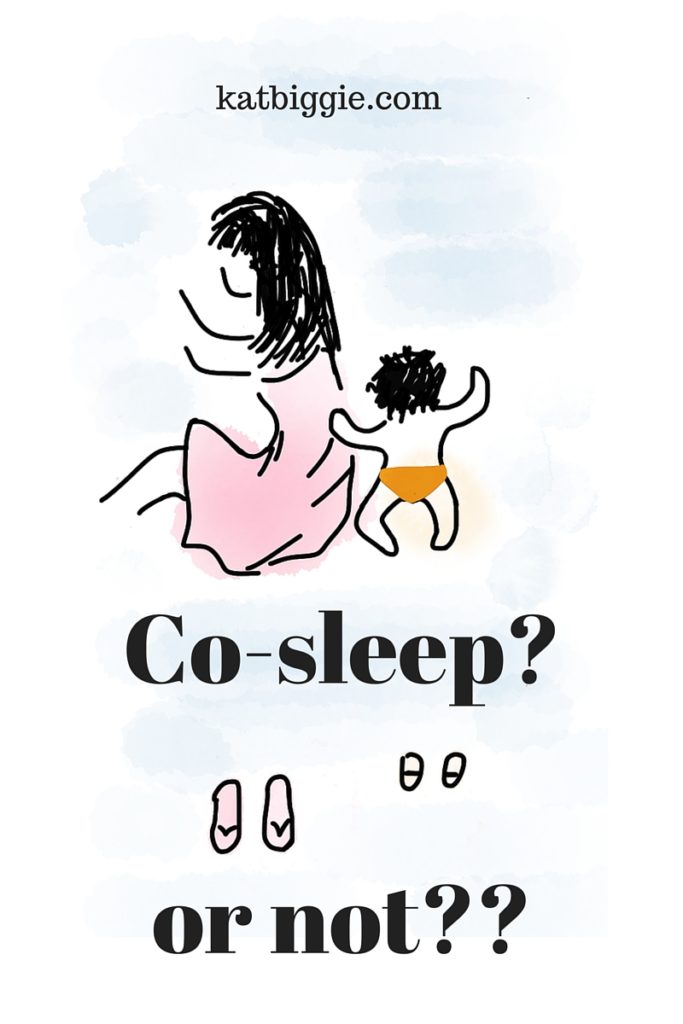 To Co-Sleep or Not?

As many young couples do, when my first husband and I started talking about having a family, we had our list of things we would not allow our children to do.

They would not throw tantrums in public.

They would eat what we prepared for them.

They would not back talk.

And they certainly would not sleep in our bed.  After all, that was our space and we did not want children in our bed with us.

And as all parents do, we adjusted to life.

We did well enforcing the “no sleeping in our bed” with our first child, although we probably would have slept more if we’d just allowed him to crawl into bed with us. He was three and a half before he stopped waking up in the middle of the night.

Our second child was off to a great start. We moved her into a toddler bed at a young 18 months of age to prepare for the arrival of the twins.

And then I went into the hospital. My husband, who spent long days at work and then time with me in the hospital, often got home after the children were asleep. He missed them, and he started bringing our almost two year old daughter into the bed with him, so that he could at least have some time with her.

And there it began. Over two years later, she still comes to get in our bed in the middle of the night every night. We created a monster.

When she was smaller, it was easier to just let her crawl into the bed with us. Rather than getting up and soothing her back to sleep, she would just nuzzle in and fall right to sleep. And we were tired. We’d had our surviving twin in the Neonatal Intensive Care Unit (NICU) for three months, and the balancing act had worn my husband and me down to almost shells of ourselves.

So we let her stay. Now she is four. Part of me loves the fact that she crawl in bed, snuggles up to me, kisses me, and loves on me. That is our special time. But by about the fifth she has kicked me, stolen the covers, or nearly edged me off the bed, I start to wonder if perhaps it is time to figure out how to get her back into her own bed. Permanently.

Co-sleeping continues to cause debate in our society. Should you, or should you not allow your children to sleep in bed with you?

I believe you should allow your own family situation to dictate what is right for you.

With the exception of one consideration. I do not advocate co-sleeping with an infant.

The American Pediatrics Association (APA) encourages parents not to co-sleep with infants.  The American Academy of Pediatrics instructs that infants should sleep on their back in their own beds to avoid, the risks of suffocation, accidental death, and Sudden Infant Death Syndrome (SIDS) – a condition in which the baby dies without explanation during sleep, and also with suffocation.

Co-sleeping with an infant has been linked with higher risks for SIDS.

The March of Dimes provides the following information:

Why is co-sleeping risky?

During co-sleeping, a baby can be hurt by:

How is SIDS related to co-sleeping?

About half of all SIDS deaths happen when a baby shares a bed, sofa or sofa chair with another person. To lower your baby’s chances of SIDS, don’t co-sleep if:

Unfortunately, when we were still in the NICU with our daughter, there was a very sad case of a woman who fell asleep with both of her twins. Although they rushed the babies to the hospital, both of them were pronounced dead shortly after. Co-sleeping with an infant is just not worth the risk.

However, when the children are a bit older, and struggle to sleep through the night, I would simply encourage you to do what is best for your family, and modify as necessary.

Do you co-sleep? Why are why not?