Today my friend Jennifer shares the story of her journey with TTTS, of love, and loss.  Twin to Twin Transfusion Syndrome has taken so much from so many people.  But Jennifer continues to be amazingly positive, happy, and dedicated to her surviving twin.  I hope you will read and share her story.  Awareness saves lives!

In March 2010, after two early unexplainable miscarriage’s, we found out we were pregnant with identical twins!

We were so happy and scared at the same time. The first part of the pregnancy was pretty good, besides my uncontrollable all day sickness! We got to watch our two very active playful,babies play together on our monthly ultrasounds. Little did we know how wonderfully important these moments were.  We actually have an ultrasound picture of Bryce grabbing Chayce’s face and kissing his forehead.

On July 21,2010 we found out we were having boys.  The same day we found out my sweet boys, Bryce & Chayce had twin-to-twin transfusion syndrome. I just remember my Ob/GYN,my friend and one of my greatest allies in this battle, holding me as we cried together. 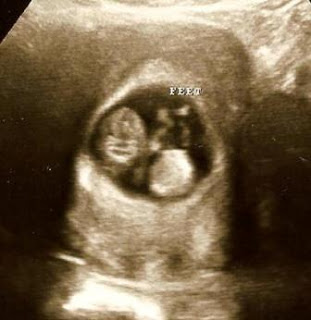 We were sent to Cincinnati children’s hospital, where they knew a little bit more about this horrible syndrome. During the following weeks we went back and forth (we live in Louisville, KY) to Cincinnati numerous times. After, millions of tests, scans, and meetings and about two weeks it was decided we would undergo an amino-reduction to relieve some of the pressure off of Bryce’s side and give Chayce some more room.

Bryce the bigger of the two (our lil recipient) showed no signs of heart damage, or hydrops, as we were told that this was the biggest risk to him. They then explained to us Chayce our lil tiny fella (donor) already showed dilated ventricles in his brain, from his lack of nutrients, and he was “stuck,” shrink wrapped by the very membrane that was supposed to be protecting him.

The doctors told us he was in the most danger of the two, at this time.  After the reduction and a couple more trips back and forth to Cincy, our boys’ fluid levels were staying stable and their health and growth was beginning to improve, I began to let my guard down and finally think, “wow I can breathe.”

Then on Friday August 6, 2010 we were told there had been a sudden spike in Bryce’s fluid again and a drop in Chayce’s, he had become “stuck” again.  Both boys remained stable with no new health concerns but it was now time to consider surgery.

On the morning of Monday August 9, 2010 we underwent the Placental ablation surgery, as this was my boy’s last chance of survival. After the surgery was over, the doctors cheered and exclaimed this was a fantastic success, they had completed the “perfect split” and Chayce (Donor)was now receiving 60% while Bryce( recipient) was receiving 40%, both boys were alive and looking great!

The next morning on August 10, 2010 with great excitement from the ultrasound tech, we had an ultrasound to see our boys.  We began with Chayce, our little fragile donor.  He had pulled through and he was moving all around!

Then next to our sweet baby Bryce or big strong recipient. He just laid there asleep with his thumb in his mouth. Or Sweet, brave strong Boy had gone to Heaven to live with God and watch over his twin brother forever.

We were told to go home and prepare ourselves to lose Chayce, while he had jumped huge hurdle, a miracle in fact (he was the smaller weaker twin which we were told they are almost never the sole survivor) he was only 24 weeks and he more than likely would be born in the next 8-10 weeks and could not survive, his only chance, very slim but chance none the less, was for me to stay calm, if and when I became upset it lowered his oxygen. So we camehome to Louisville & went to our regular Ob/Gyn & High risk, I rememberI just lost it. How was I supposed to be a good mommy and continue to fight ashard as I could for Chayce, while my heart ached so badly for Bryce?!?!

I refused to accept that Chayce couldn’t make it, he had fought so hard, and was so brave and strong! He was/is my child and I would not/ will not give up on him! My little tiny sweet doctor rushed into the room & hugged me as we cried together and she told me that as always she would continue to fight right alongside of us and that she had faith that Chayce could and would make it! Also she let me know it was ok to be sad and cry for Bryce.

So we hoped and prayed for my lil bitty boy to hold on and cook a little longer and to pull through. He had his big strong guardian angel, my sweet brave Bryce to watch over him and hold his hand. Well over the next 10 weeks, I was seen twice a week to monitor Chayce’s growth which was slow but steady, also I was given two rounds of steroids to help his lungs grow at 33 weeks and then on November 11, the ultrasound showed he had not grown any in the past two weeks and had actually fallen below the percentile.

So they decided to admit me and monitor him until the following morning, giving my parents and brothers time to get here from Texas. On November12, 2010, Bryce Lee Scott (born asleep) a little under a pound and Chayce Allen Scott, 3lbs 5oz and 17 inches long were born at 34 weeks! He had made it, and he scored all 9s and 10s on the agar scale and was breathing on his own! 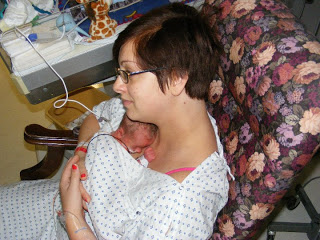 We stayed in the NICU 20 days, and the day we left, the funeral home called us to let us know we could come pick up Bryce  (he had been cremated) .We finally brought both our boys home. Not the way we had dreamed, not in two car seats, not in matching outfits, but together.

As for Chayce, we have small struggles but he amazes me every day! He just turned two earlier in November.  He is a true miracle. Every day I think of the son and brother we have lost and thank god for the one we have! I am so proud both of my boys they both fought so hard and Chayce continues every day! They said my son would never live, he did, they told me Chayce wouldn’t breathe on his own, he did. He shows me and all of his doctors that he is a fighter and is going to be just fine! He has a sweet lil angel by his side to help him along the way.