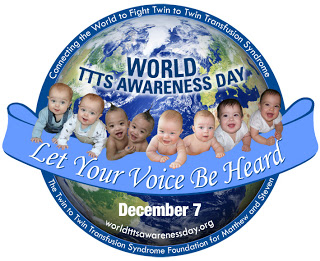 Please share the word!  Get your local news stations involved by sharing some of the PSAs and the Press Release that are posted on the TTTSFoundation.Org webpage.

You can also get some really cool banners for your Facebook Cover at Random Renee’s Facebook page.  She has made some beautiful banners!

Here is the official Press Release about World Awareness Day that I copied off of the TTTS Website.  Please feel free to share by visiting here!

BAY VILLAGE, OHIO NOVEMBER 24 – December 7, 2011 marks the fourth annual observance of World TTTS Awareness Day (worldtttsawarenessday.org). World TTTS Awareness Day is an international
mobilization effort created by The Twin to Twin Transfusion Syndrome Foundation to increase awareness of the #1 problem facing twins and higher multiples. It is crucial for women to get an ultrasound in the first trimester to identify multiples and then to determine whether there is one placenta or two. TTTS can only occur when there is one placenta. Women must learn the warning signs of TTTS, the 15 questions to ask at each ultrasound, andthe available treatment options. World TTTS Awareness Day is about empowering parents and is filled with messages of Hope, Help and Encouragement. The TTTS Foundation encourages families to Get Educated, Get Ultrasounds, Ask Questions, Get Treatment and Get Involved!

The Matthew and Steven TTTS Walk for the Babies is part of World TTTS Awareness Day. On December
7th, participants from all over the world will walk in their hometown to raise money to fight TTTS and increase awareness of the disease.

Matthew and Steven are the identical twin sons of Mary Slaman-Forsythe, founder of The Twin to Twin Transfusion Syndrome Foundation in Bay Village, Ohio. The Foundation was created as a promise that Mary made to her babies on the day of their birth. Little Steven passed away from TTTS. Mary
shares, “There were treatment options that our doctors withheld from us that would have saved Steven. In
1989, the Internet did not exist and there was no way to get immediate information. I never want another
mother to be told there is nothing that can be done.

In the last 22 years, the Foundation has helped over 14,000 families. We are the first and only international, nonprofit organization solely dedicated to fighting TTTS. My promise to my sons is my life’s conviction.” In honor of the donor and recipient babies affected by TTTS, a candlelight vigil and prayer will also take place at 5:10PM and 5:15 PM in all time zones.

Parents can also light a virtual candle at www.worldtttsawarenessday.org and send a prayer to their babies.

Twin to twin transfusion syndrome (TTTS) is a disease of the placenta that affects identical twins, (or higher
multiple gestations), who share a common monochorionic placenta at any time during the pregnancy. The
shared placenta contains abnormal blood vessels which connect the umbilical cords and circulations of the
twins. As a result, one baby, the recipient, receives more than normal amounts of blood and his cardiovascular system becomes overloaded. The recipient then produces too much amniotic fluid, the first sign of TTTS, and is at risk for heart failure. The other baby, the donor, receives less then normal amounts of blood and becomes anemic. The donor baby produces little to no amniotic fluid. The donor is also at risk for heart failure. There is a range of severity to TTTS, but it is always life threatening. Even the worst cases of TTTS can be reversed with treatments such as in-utero laser surgery, but parents need to be educated.

The events in pregnancy that lead to TTTS – the timing of the twinning event, the number and type of connecting vessels, and the way the placenta is shared by the twins are all random events that have no primary prevention.

TTTS is not hereditary or genetic, nor is it caused by anything the parents did or did not do. It is not something the babies do to each other. TTTS can happen to anyone.

The risk of TTTS is about 1 in every 1000 pregnancies or 15% of pregnancies with multiples that share a single placenta. These figures are based on 2005 reports and do not include pregnancies with losses prior to 20 weeks gestation. The Twin to Twin Transfusion Syndrome Foundation estimates the rate of TTTS to be much higher. Studies also show a higher rate of identical twins (up to 20 times with In-vitro Fertilization, IVF) than spontaneously conceiving multiples, contributing to the higher percentage of babies being afflicted by TTTS.

For more information on World TTTS Awareness Day, please visit the websites at worldtttsawarenessday.org and tttsfoundation.org or call 1-800-815-9211.