I was cleaning out my email and I came across a trail of emails I sent out to friends and family, starting on September 29, 2011. We had just received our TTTS diagnosis.

I wanted to post this email here. As I read over it, I realized one of my prayers (I’m sure more than that, but one VERY specifically) was answered. I asked for a miracle that I would stay pregnant til 30+ weeks. I made it to 30 weeks 5 days – which is probably the only reason Tiny is alive.

I want to remember and to have this information available for my Tiny Survivor when she starts asking questions. 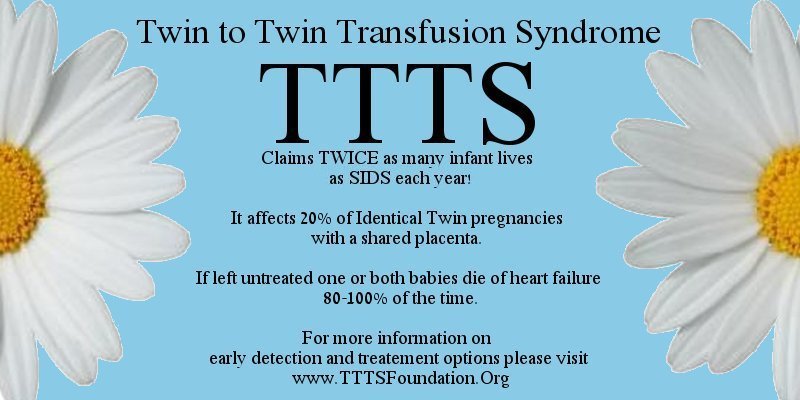 First of all, please feel free to forward this out – I’m still kind of in a daze and I know I missed a lot of people.

To catch you up on the situation, Jeff and I went to my 20 week ultrasound/anomalie scan yesterday.  As the technician was doing the scan, she noticed two worrisome things.  One – Baby A weighed 15 oz (which is big for this time) and Baby B was only 8 oz.  2ndly, Baby A has fluid in her belly and around her heart.

There is a condition specific to identical twins that share a placenta called Twin to Twin Transfusion Syndrome – or TTTS, and both of these findings are a sign of this condition.  For reasons I can’t really explain, one Twin gets too much fluid and the other does not get enough.

The next 12 hours were pretty much terrifying for Jeff and me.  First of all, my doctor, who really needs some training in how to deliver bad news, told us that she would be transferring my care to the High Risk Peri Natal Doctor, who I actually had a consult with before we started trying to conceive because of the Lupus.  I found him to be very knowledgeable, kind, and shares so much information.  However, when I asked my doctor if there was anything that could be done about this (after she told us what was going on), she shook her head and told us nothing could be done.

So, she told us I was being immediately admitted to the hospital, and after a long wheel chair ride from my OB’s office (which is thankfully in the hospital) I lost it when we entered the Labor and Delivery Ward.  AFter all, 20 weeks is too early to be there, and from the impression we got from my other doc, this was it for the babies, and there wasn’t a chance for them.  Thankfully, over the next two hours, we began to get information from the specialists that certainly contradicted that.

It was very hectic but we started to get some better news as nurses and specialists came in to talk to us.  We still didn’t really know what was going on, but the high risk doc on call relieved a good bit of our anxiety by telling us that they do have a few procedures that they can try which have good stats on being successful and that we should be cautiously optimistic.  she also told us that it was good they caught the fluid in Baby A at 20 weeks because hopefully it has not had time to do too much damage to her organs.

I’ll omit many of the details that follow (admittance, all the in-processing, all that hospital stuff) and pick up with this morning.  Dr. Brown (high risk doc) and his team made their rounds at about 8am.  We had already been told that they wanted to do a procedure called an Amnio Reduction.  The idea here is to draw out as much of the extra fluid around Baby A which relieves the stress on her and also gives Baby A room to grow.  Right now, A is having a good time rolling all over the place in all of her fluid, and B is somewhat suspended and very limited in space and fluids.  They do this like a normal amnniocentisis, but it is a longer procedure and can take up to 45 mins to an hour to draw all of the fluid.  Risks are the same as with anyone who has an amnio – a puncture in the sac and leaking fluid, contractions and pre-term labor, but the risks of NOT doing this procedure now would result in an onset of labor early and a high chance of stillborn babies.  So, it was a no brainer.

The doctor and his team were awesome.  They hooked up an ultrasound and Jeff and I could both watch the babies and the location of the needle.  They told us everything that was going on.  They drew out over 500ml of amnio fluid (about a pound!) which should relieve the pressure on both babies and what we HOPE to see next Friday is growth in Baby B and reduction of fluid in Baby A’s stomach.  He was very candid with us and told us that Baby A is already very sick and he was concerned at the amount of fluid in her belly.  This procedure may have to be repeated weekly, bi-weekly, or we may be a miracle case and it could potentially be a one time fix, although that is unlikely, but that’s what we need you to pray for.

Luckily the procedure went smoothly, they removed a good bit of fluid, and despite the little Rascal Baby A shoving poor little B up and near the needle a few times, the babies maintained good heartbeats and movement.  I had no contractions, no problems, and thankfully was released from the hospital at about 4pm today.

I am scheduled for an ultrasound on Friday and they have gone ahead and scheduled this procedure as well, because even if only a little fluid has built up, if it is still a high discrepancy between the two, they will again relieve the fluid.

The good news is that yes, this procedure can have excellent results.  The bad news is that the average delivery time for women who have to start this procedure at 20 weeks is approximately 28 weeks.  He was very frank with us and told us that our goal right now should be 24 weeks (he’d prefer 25 just because Baby B is so small) and when we make it there, we’ll set a goal for 28 weeks.  Even at 28 weeks, he told us it is likely they would be in the NICU for 2-3 months.

Now I know often the doctors give you the absolute worst case scenario to prepare you for the worst.  I am hoping that is the case.  But we also realize that both babies are in a very dangerous position right now, and it is very serious.

Specific prayer requests would be that between now and Friday baby A has fluid reduction and Baby B grows, and that the fluid level stays somewhat level between the two.  Then you can pray that they don’t come before December!

I have not been placed on full bed rest because he says there is not much (other than the normal things pregnant women aren’t supposed to do) that could trigger pre-term labor, however, he doesn’t want me exercising extensively (darn) or lifting heavy things (ie Ella) especially til we’ve made it to viability (25 weeks in this case).

So, it’s a mixed bag of good, bad, and really terrifying, yet also hopeful news.  I believe in the power of prayer, and would just ask that you say a lot, because regardless of the outcome, unless we get a true miracle and these girls hang on til 30+ weeks, we have a long road ahead of us.  And there have been cases of that happening, so I remain hopeful that our babies will be the exception to the rule and go til at least 34 weeks!

I appreciate all of the text messages and phone calls.  Your support really helped me through the night and today.