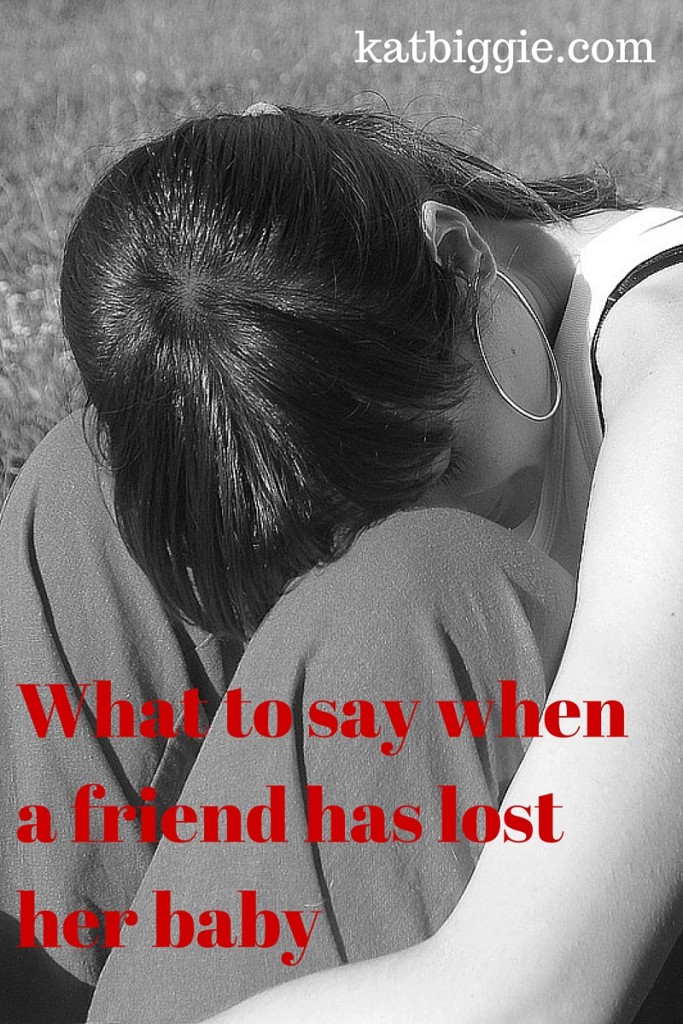 The truth is… everyone is different and it’s so hard to know what to say when a friend lost their baby.

Even in my own group of moms I know. Some mothers want to talk and talk about their experience, while others keep a very close hold on their grief. Some want to be surrounded by other grieving mothers who understand and can support them, others want nothing to do with being in an environment that they believe will take them to a darker place.

The number one search term on this blog, day after day, week after week is “words to say when someone loses a baby.” And my most popular post, not surprisingly, is The Magic Words When Someone Loses a Baby. But the truth is, each case is different. Each person is different. It’s so hard to know what to see when a friend lost their baby.

My first exposure to “baby loss” occurred in April 2005.

I had only been stationed in Germany for a few months at the time, but my husband and I had made friends quickly as you do in an overseas military post.  The Lieutenant who had sponsored me for my move (we’ll call him Corey) and his German wife (let’s call her Anja) had really taken us under their wings.  Anja was pregnant with their first baby.  A girl.  Although they had very little for the baby, Anja hesitated when the ladies in the unit offered to throw her a baby shower, because according to her, in German tradition it is bad luck to give a baby presents before it has arrived.  But we insisted that everything would be fine, and Americans always have baby showers…

As my foreshadowing may have warned you, something went terribly wrong.  Anja was a week past her due date.  The doctor made the decision on Friday they would wait through the weekend and if she had not gone into labor by Monday, they would induce. At about midnight on Friday night/Saturday morning, Anja became worried that she had not felt the baby move in awhile.

On Monday morning when I arrived at my office, my boss was waiting for me.  I could tell something was wrong, but my first thoughts turned to our Airmen who had recently deployed to Iraq.  The Captain explained to me that Anja and Corey had gone into the hospital on Friday night, but when they arrived it was already too late.  At some point that evening the cord wrapped around the baby’s neck.  Anja delivered the sleeping baby early Saturday morning.

I was shocked and grief stricken.  I did not have any children at the time, but we had been sharing Anja and Corey’s excitement for almost five months.  This loss hurt all of us.

There was a funeral.  The service was in German and I didn’t understand the spoken words, but I understood the message. The grief.  The pain we all felt for this tiny being, who was taken for reasons none of us could understand or come to terms with, was more immense than I could imagine.  To this day the memory of that tiny white casket is burned into my brain.  I refused to have a casket for our Kathryn’s Memorial Service because I am still haunted by the memory of that casket.

After the service I will never forget how Anja stood there and hugged one person after another, how she comforted all of us as we grieved for her baby, how terrible I felt that I could not stop sobbing and the only words that I could manage to mutter out of my lips were “I’m just so sorry!”

What could I say?  What would make it better?  Anything?

And still now, even after having lost my own child (another example – some people get really bent out of shape when you say “lost” – but I just hate saying “when my baby died”) – I still struggle with know what to say.

So I understand why you are uncomfortable with trying to choose your words.

Just know this – if you cannot find words, you can SHOW your love. Be willing to listen. Ask mama if she wants to talk about her baby or show you pictures. Make dinner. Help around the house.

I have a whole list of ways you can help your friend after experiencing the loss of a baby or child. Check that out.

If you’re searching what to say to a mother who has lost a baby, I know you care tremendously. And your friend or loved one will know it too.