Normally I don’t blog about things like Superbowl commercials. But the 2015 Superbowl commercials were awfully “special” weren’t they? This year, they seemed to be focusing on making everyone cry rather than laugh. (Except the one with the screaming and the goat. That was hilarious!)

There are three in particular that I really want to address.

#likeagirl and #makesafehappen and #nomore

I love the #likeagirl idea. I love promoting fair treatment, equality, and the idea that girls can do anything that a boy can do. All 10 of us at my house sat attentively glued to the commercial. Not a sound in the house. I felt tears swelling up as we watched these young girls be strong #likeagirl.

And then, the Always(R) logo popped on to the screen. And all of us laughed out loud. I mean, LAUGHED.

Why ruin such an amazingly wonderful message with the image of a maxi pad??

In a split second, the message was stomped on. OK so it didn’t totally lose it’s value, but it lessened it.

Did they mean for the message to be that just because girls have periods doesn’t mean we are weaker? I don’t believe that was the overall message of the commercial.

Always(R) did a phenomenal job with the commercial and the overall message. We were all HOOKED. I was pumped imagining the #likeagirl world my two little girls are going to grow up in. Better yet, pair up with an organization like Girls For A Change (GFC) who work day in and day out to help empower girls. But a maxi pad commercial in the middle of the SUPERBOWL? FAIL.

It would have been an incredible commercial if it had come from Nike or Harvard or the WNBA or some science and technology agency or SOMETHING traditionally geared towards boys and men. Do you disagree that it lost something in translation when it was a commercial for a maxi pad?

I hope the #likeagirl movement continues and grows stronger, but I’d like to see it happening from organizations that actually have some sort of influence over boys and men. Regardless, it’s worth the watch. The commercial was so well done. But let’s get the conversation moved beyond female hygiene and beauty products, please.

And then there’s the #MakeSafeHappen. Seriously?

Nationwide has received some serious backlash for this commercial. I’m sure you’ve already heard others talking about it. In response, they offered this explanation:

Preventable injuries around the home are the leading cause of childhood deaths in America. Most people don’t know that. Nationwide ran an ad during the Super Bowl that started a fierce conversation. The sole purpose of this message was to start a conversation, not sell insurance. We want to build awareness of an issue that is near and dear to all of us-the safety and well being of our children. We knew the ad would spur a variety of reactions. In fact, thousands of people visited MakeSafeHappen.com, a new website to help educate parents and caregivers with information and resources in an effort to make their homes safer and avoid a potential injury or death. Nationwide has been working with experts for more than 60 years to make homes safer. While some did not care for the ad, we hope it served to begin a dialogue to make safe happen for children everywhere.

Oh they started a conversation alright, but I sincerely hope the message did not get lost in the blowback! How many people are actually talking about preventable injuries around the home and what we can do to fix that today? I hope many, but from what I’ve seen on social media so far, that’s NOT the conversation that is coming out of this commercial.

On the one hand, as a grieving parent, I’m really upset by it. The commercial didn’t lead me to think about those types of injuries. It made me think of death and loss. It made me think of the baby that died in my arms that will never learn to ride her bike or go sky diving or get married. While all of us at my house were shocked by the commercial, none of us struck up a conversation about how to prevent those accidents. (OK, we did talk for just a minute about the colorful dish detergent packs, but only with a smart-aleck remark by my husband that if a child has access to laundry packs, that is NEGLIGENCE, not an accident.) And then we moved on from it.

But the anger lingered for me and for many. The anger that they would take something like the death of a child and use it for their own benefit. It was an extremely insensitive commercial.

On the other hand, I applaud the effort to talk more about safety. Children’s health is my platform, right? So I should be THRILLED beyond words that someone has taken this topic and blown it up for all to see.

But was it self serving? Because guess what? Everyone and their brother is talking about Nationwide today.

So my hope is that it DOES spark a real conversation. About all of it. Safety in the home, using the correct precautions, and thinking about things like safety belts, helmets, water safety, chemical hazards. There was a missed opportunity here too. I’m very, VERY disappointed that they did not include accidental shootings because that is happening so frequently these days too… but then they would have had to contend with the NRA, right?

If a real conversation about safety in the home ss what we take away from the commercial, then good.

It’s been entertaining to watch the backlash on social media. Like this one, that is sick humor, but still kinda cracked me up. 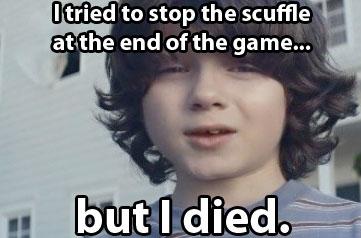 #NoMore – you are not alone. This one is about domestic violence and abuse. Simple, powerful, important message.

I think the best part of this message is that they used the voice of what sounds like an educated woman and showed images of a middle class home. This is not to understate the importance of taking care of ALL victims, regardless of race, income levels, etc, but I think it reminds people that domestic violence and abuse can happen to anyone. And that we have to be open to seeing it and helping, even if the person can’t come forward on their own.

This hit close to home. A few years ago, my pediatrician at the time was in the news. Her husband was shot and killed – suicide by cop – when he came tearing out of the house with guns pointed at the cops. He WAS a cop, he knew what was happening. As more of the story came forward, we learned that sadly, she’d been abused physically, over a long period of time, and called the cops that day because she was afraid he was going to kill her and her young daughters. She is a highly educated DOCTOR and she still faced abuse and violence in her home. And I would have NEVER guessed it. We were all shocked.

We need to support these women. Thank you to #nomore hopefully we’re talking about this now too.

What are your thoughts on these superbowl commercials? Did you feel strongly for or against any of them?