Today for TTTS Tuesday I am proud to highlight my friend Megan, who created and has grown Teeny Tears into an amazing project in memory of her son Dex. Teeny Tears is an organization that provides diapers for preemie and micropreemie babies who pass away before or after birth. Megan is just an incredible and beautiful, strong woman, and someone I am proud to call a friend. I hope you will read her beautiful story, and if you feel compelled, join the Teeny Tears movement!

Crew and Dex’s Story as told by Megan

In the summer of 2008, our family received the exciting and surprising news that we were expecting twins! Knowing that we were now involved in a high risk pregnancy, I hopped onto the internet and learned all I could.  In the back of my mind all I kept thinking was, “people have twins every day!  This is not scary; this is exciting!”

Early in November, when I was only 28 weeks along, my water broke in the middle of the night. After calling one of our good neighbors to stay with our children, we raced to the hospital. At first the nurses couldn’t find any heartbeats, but that didn’t seem terribly unusual or alarming because they were very young and very small babies. After they had given me all the medicines in their arsenal to stop my labor, they became more serious about finding heartbeats. They found one tiny, weak heartbeat and it was failing quickly. They rushed me across the hall to the operating room and brought my sons into the world 4 minutes later through an emergency c-section.

When I awoke from the general anesthesia several hours later, my whole world had changed. Our son Crew was 1 pound 8 ounces, the size of a dollar bill. He had been born without a heartbeat, but was quickly resuscitated. Two more minutes and we would have lost him. As it was, he had a very tumultuous 3 months in the NICU, camping out on death’s door more times than we care to count. Today our little survivor attends special needs preschool. He started walking and talking this past summer and is a great blessing to our family. 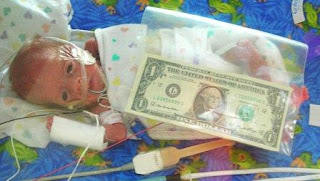 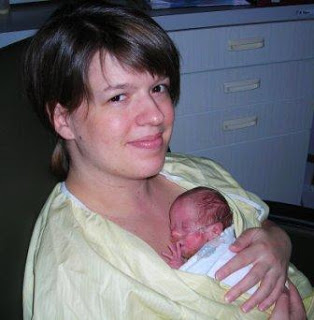 Our son Dex was 2 pounds 1 ounce. It was my husband’s greatest sorrow to tell me that our little one did not survive his journey. He had passed away minutes to hours before birth from an undiagnosed and dangerous disease called Twin to Twin Transfusion Syndrome. It’s a condition that affects a small percentage of identical twins that share a placenta.  I learned later that my doctor had suspected that we were developing this disease, but hadn’t wanted to alarm me, so failed to mention it during our final ultrasound appointment.  He also did not send us to a perinatologist, or mention the possibility when I went into false labor twice in the weeks preceeding the delivery of our sons.  I had asked about the possibility of TTTS during every ultrasound appointment… except our final ultrasound at 25.5 weeks.  It was the one time I did not ask about it.  My doctor did not understand the urgency of proper diagnosis and intervention.  Years later I learned that I had been exhibiting all of the classic symptoms of TTTS on a rampage.  In the end, we had TTTS, placental abruption, and ruptured separation sacs.  I thought I was just 5 foot 1 and having twins.  Little did I know what a dangerous train wreck was going on inside.

Dex was placed in my arms wearing this beautiful handmade gown that was appropriately sized for his tiny body. The bereavement specialist at the hospital took hand molds and feet molds so that we could always remember how small he had been. They took beautiful pictures of him that we count among our greatest treasures today. They were even able to take a few pictures of our sons together in Crew’s incubator, the only photos we will ever have of them together outside of the womb.

Meeting Dex in person was one of the most beautiful experiences of my life. I felt him the moment his body entered the room and holding him in my arms the first time was like a healing salve for my broken heart. I’ll never be able to explain it perfectly, but the closest I can come is to say that I just felt an overwhelming sense of peace and hope and love from my Heavenly father. He was so beautiful. His spirit stayed with us throughout the day, giving us comfort and letting us know without question that he loved us, he knew us, he claimed us as his parents, and that things had turned out exactly as they were supposed to, no matter how we got there.

I don’t wish to give the impression that my heart wasn’t completely broken, because the truth is that I didn’t know how I could bear to live without him. There were so many moments of anguish, nights that I was afraid to fall asleep, tortured thoughts of how we could have saved him with earlier intervention.

As we came closer and closer to Dex and Crew’s third birthday, I began searching for a project that would honor Dex’s memory and give purpose to my grief. I was looking for something economical, meaningful, and within my limited sewing abilities.

I would make tiny little diapers for stillborn micropreemie infants and those that pass away in the NICU. We launched Teeny Tears last November.

Approximately 26,000 children are stillborn in the United States every year, about 1 in 160 births. Another 19,000 children die within the first 28 days of life. A significant number of these angels are preemie or micropreemie infants. The littlest angels are so small that even the very tiniest Pampers NICU diaper is far too large for them. Besides that, their skin is so delicate that commercial diapers are very damaging. 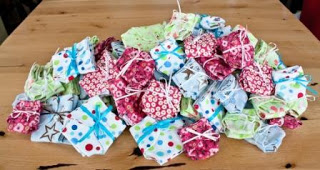 Our volunteers donate to hospitals and bereavement support organizations at no charge. These small diapers fit angels between 18 and 23 weeks gestation. The large ones fit angels between about 24 and 30 or 32 weeks. The need for these diapers is enormous and endless. Gone are the days when angel babies must be left with naked bums because there is nothing suitable. No longer must nurses try to fashion a “diaper” out of cotton balls and tape. Our little diapers offer dignity and modesty to the tiniest angel babies. We provide two diapers per family, so that the parents don’t have to choose whether to keep the diaper in a memory box or to bury the diaper with their child. This way they can do both.

Grieving parents often feel very lost, alone, and confused. Every special effort to honor their loss goes a long way. It is very difficult for a family to say goodbye to their child before they got to say a decent hello. These diapers, made with love, tell parents that someone understands that their child existed, that they are special, loved, real, and that they matter. The love that goes into these diapers tells a grieving parent that someone understands that their loss is tremendous. Because “a person’s a person, no matter how small.”

As you can imagine, November is always a tender time of year for our family. The year we launched Teeny Tears was the first November that I didn’t spend the first half of the month hiding under my covers in bed, eating chocolate leftover from Halloween. As I sewed for angel families, I felt close to my son and my heart was filled with love and a peace I didn’t know was possible.

Teeny Tears is my way to make sure that Dex and all of his angel friends are remembered.  It has been an unexpectedly joyful and healing endeavor and I have met some of the most caring and generous people along the way.  Many of our volunteers are angel families themselves, some of them still the walking wounded. As they participate in serving others in a similar plight, a miracle happens. They find their own sorrows lessened and their hearts begin to heal. Joy is found and lives are changed.

What began as a personal labor of love for the angel families at my friend’s local hospital in Washington and then ours in Utah has caught on like wildfire within the bereavement community. We have a busy Facebook group filled with volunteers across the United States as well as in Canada, Australia, and New Zealand who are gathering their families, friends, neighbors, and churches to serve Heavenly Father’s tiniest children and their bereaved families. We even made our first delivery to a hospital in Guatemala.

As an inexpensive, simple, unique, educational, and meaningful service opportunity, our diapers are being sewn by families, sewing clubs, youth groups, Eagle Projects, Angel Mother grief support organizations, and churches of all religious denominations. We encourage our volunteers to donate within their local communities and we also match volunteers with hospitals all over the country on our growing waiting list. Grandmothers are digging their flannel scraps out of storage, families are repurposing old receiving blankets and shopping yard sales for fabric remnants. And we know when all the fabric sales are going on!

To date, our volunteers have donated more than 21,000 diapers to grieving angel families across the world.  While I wish no one ever needed our diapers, I am pleased that there is something that we can try to do for these families to let them know that they are not alone. 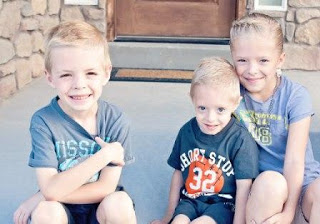 Crew just turned 5 years old on November 24th.  He is charming, sweet, and far too small for his age.  While he continues to be challenged by the lingering effects of TTTS, we are so lucky to have him with us.
Happy 5th Birthday Crew (and Dex!)