I would rather eat a bug than purposefully offend or hurt someone.

I have been known to be a little sensitive myself, and I cannot stand the thought of intentionally causing someone pain.

Doesn’t mean I haven’t done it. Sometimes, as people, we are just naturally mean spirited. But I always feel badly about it.

I’m trying to raise my children in the same manner. I want them to be sensitive and aware of how their actions and their words impact the people around them.

Words can be the most powerful weapon we own.

This week we had to teach my son the lesson of the impact of hateful words. Thankfully, they were not his words. But it’s my responsibility to make sure he’s never to say them. 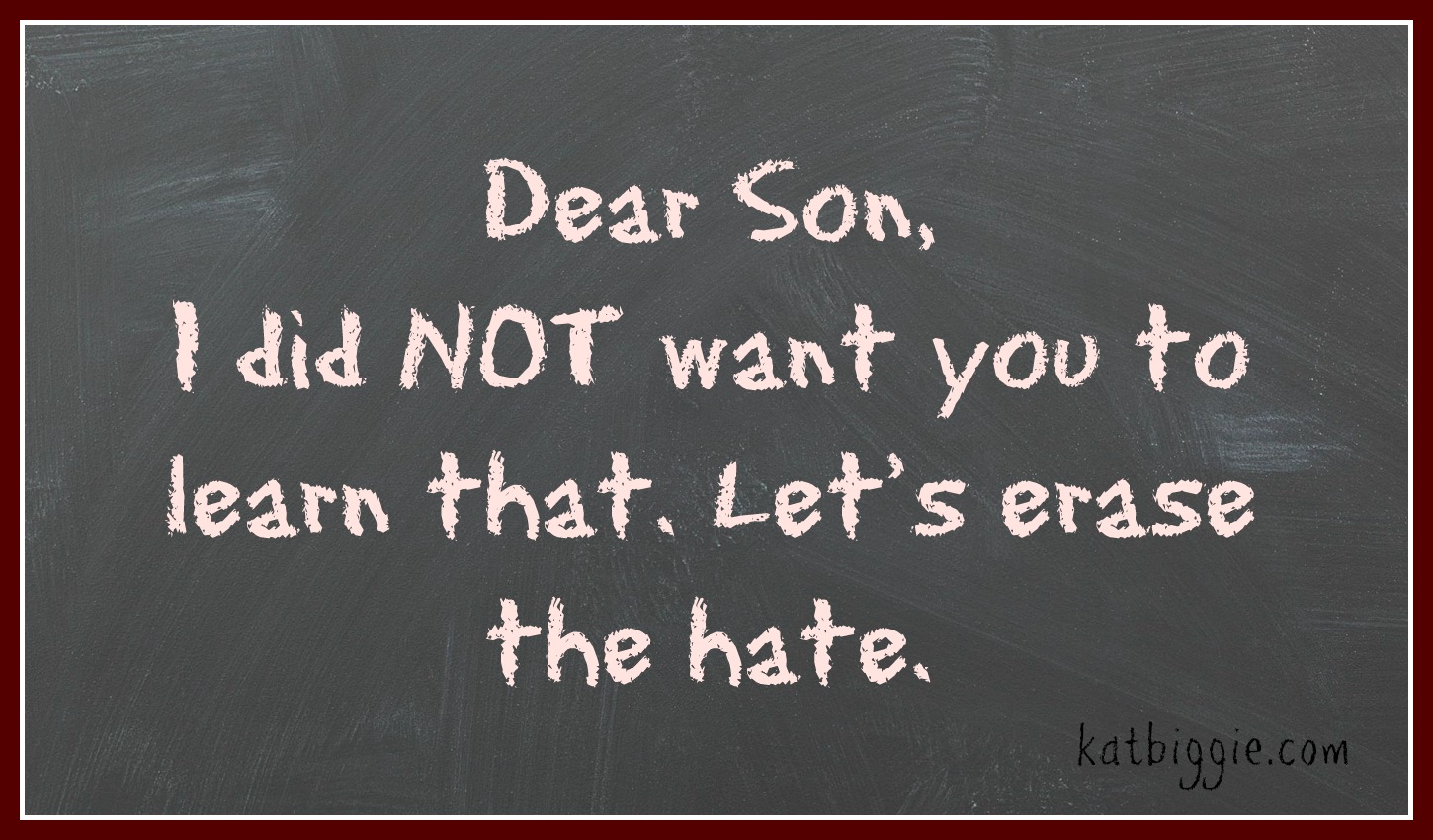 It can be hard raising children in the South. Racism, sadly, still exists everywhere around us. I had hoped we would make it a few more years before it was a problem that had to be addressed.

Seven is still too young, in my mind, to be poisoned by hate.

I think the best part about children is their naivete. I love watching children interact with children. Small children, who may notice that another child is different from them, but they don’t care. They don’t know that there are any stereotypes or discrimination or any reason why they should not like and want to play with another child their age.

They just want to play.

I’ve been blessed with three very loving children. We have raised them to treat everyone fairly and equally, to forgive when someone hurts them, to stay away from people who are mean, and to help a person in need if the occasion should arise.

That is the way I was raised. I’m so thankful my parents celebrated diversity and exposed us to other cultures and ethnicities. As a child, I never heard even a single racist comment. We were also in a military community, which naturally creates a large amount of diversity.

But outside the walls of our home, I realize this is not always the case.

Including in my child’s school.

I wish that my children would not be exposed to racist remarks and bigotry.

But that is naive on my part.

That reality came crashing down upon us this week. As we cleaned up the kitchen after dinner, we were chit chatting about school, and my son, Bug, casually says, “‘L’ says you can never trust a black person.”

When I tell you that my head almost spun off my neck, I turned so fast, I’m not really exaggerating.

The emotions that coursed through my body at that moment – anger, shock, disappointment, sadness, disbelief, and shame – made my heart pound loudly as I tried to calm myself and figure out how to respond.

My heart hurt worst. The idea of another generation of haters being raised. Will it ever stop?

I just wanted to erase the hate. In that moment. Wipe the slate clean.

Can we erase the hate?

In that moment, we tried to process what we had just heard. Taken off guard, my husband and I both yelled something like, “He said WHAT?”

I immediately began to chastise my son. “I do not EVER want to hear you say something like that!”

“But why would you repeat it? Your best friend is black!”

He looked at me with a puzzled expression. “Who?”

“He’s not black, he’s brown,” Bug informed me. It occurred to me in that moment that Bug might not even know what a “black” person is. He refers to anyone with darker skin than his (including his dad’s) as brown. And it’s always been in a “descriptive” way – not a discriminatory way.  Just like all kids do. They describe everyone as peach or brown.

My husband and I took the opportunity to have a very real conversation with our son.

I never expected to have to have a conversation about #racism with my 7 y.o. via @katbiggie

We covered the following points:

I think the conversation went well. I came to realize that Bug, thankfully, didn’t seem to understand what “L” meant when he said this phrase. I wonder if “L” even knows what it means. We’re certain it’s something he learned from his father. Because what seven year old would come up with something like that on their own?

I had to be very stern with my son and tell him he could never ever say something like that. Not only because of all the reasons discussed above, but even if he didn’t understand what he was saying, if that was overheard, he would be in a lot of trouble and he could cause a lot of pain and misunderstanding.

My husband made sure to end the conversation by telling Bug that it’s okay for him to come talk to us about things like this when he hears them and doesn’t understand. We’ll always talk to him. I hope he always feels open enough to share with us when he’s confused or feels something isn’t quite right.

I didn’t want to have to deal with racism this early on. It doesn’t seem fair. I’m pissed off that some child’s racist father just stripped my son of an innocence that he still had.