In April 2014 I had the opportunity to review Christopher Datta’s historical fiction Touched with Fire. I loved this book. It is a book based on actual events and people in the Civil War. This particular book was about Ellen Craft, a slave who was so light skinned people believed she was white. She was able to escape to the north during the war, but her husband was stuck in the south. So, she pretended to be a man, joined the Union army, and fought her way back to the south to find her husband.

I love books about the Civil War. I love books about amazing women, and I love books that teach me. And I learned a lot from this book. Added bonus – it was an enthralling read! (And most of the book was about battles in the war, so don’t shy away men if you think this is a girlie book! It’s not.)

Novel Publicity approached me again to see if I’d like to review Christopher Datta’s second book in the series (yay, it’s a trilogy!) Fire and Dust. I agreed, they provided me a copy in exchange for my review, and I set to reading.

The second book (Fire and Dust) did NOT disappoint.

It was not long before I was so engaged with the characters in Fire and Dust that I stopped looking for my friends from book one. This book was really interesting to me, particularly as a military veteran, because it went into detail about a lot of the military strategy (or lack there of!) and the decisions of the commanders. But it wasn’t just about battles. It was about relationships and how the battles shaped these men, and changed them. There were sections of the book that were about their families and home life and the events that were happening to the families left behind in southern communities. There was romance, intrigue, action, suspense, and, as to be expected in a book about war, fighting, loss, and death. Data also provides an inside look into the battles that began the beginning of the end for the Confederate army. 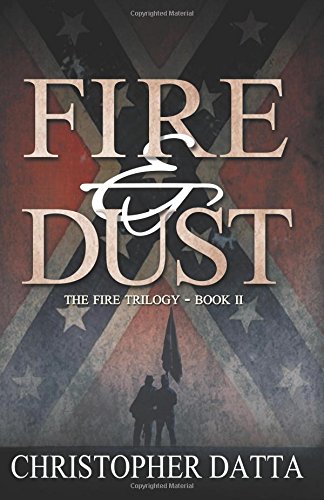 Christopher Datta did such an amazing job with the characters that when one particular soldier was killed, I felt a hole in my heart. I literally yelled “NO!” when he was shot. I am still sad about this guy. He represents so many of the senseless deaths from war, and the egotistical decisions made by some men who refuse to listen to reason or be persuaded by any information that could possibly sway their decision.

This book was so good that I actually stayed up til 1:30am two nights in a row reading. I don’t remember the last time I stayed up that night with a book. I have three small kids that are going to be up by 7am even if we are on Christmas break, and usually, 11pm is a very late night for me. So, that speaks volumes to this book.

Here is an official description of the book, which truly nails the heart of the book:

Book II of the Fire Trilogy

In the fall of 1863, there is still a chance to prevent a Union victory in the Civil War. Robert E. Lee’s most trusted senior commander, General James Longstreet, takes two Virginia divisions west to unite with General Braxton Bragg’s Army of Tennessee. Longstreet arrives just in time to join in the Confederate attack on the Union army at the battle of Chickamauga.

As the fate of the Confederacy is decided, this epic saga plays out against the backdrop of the love stories of Mexican war veteran Sargent Sam Davis and the recently widowed Sally O’Grady, and of the young, poor and naive private Harry Kolb and Rachel Shaw, the daughter of a wealthy plantation owner. Their tales bring to vivid life the forgotten watershed moments of September, October and November of 1863, a period that more than any other determined the outcome of the war.

Fire and Dust narrates the history of the Civil War as it really was, and makes you a front row witness as the destiny of the Confederacy unfolds.

“If you thought you knew the Civil War, think again. In Fire and Dust, Christopher Datta takes you beyond the clatter and gore of the battlefield to reveal the very hearts and minds of the Confederacy. His characters will haunt you like a rebel yell, sounding down through the years to touch you with their sacrifices, their struggles, and—most of all—their humanity.” Karen Lyon, Hill Rag Magazine

Get your copy of Fire and Dust today. You won’t regret the decision!

*This post does include affiliate links. Buying the book through these links will not change your price at all, but I will receive a small “thank you” for sending business their way.