Today’s post comes from someone I have become friends with through several TTTS support groups on Facebook.  His story has a happy ending, but demonstrates that even those families who have both twins survive still go through hell while fighting this disease.  Marcel’s story is also different because he is in the UK.  TTTS, like all diseases, knows no geographic boundaries.

OUR TTTS JOURNEY
by Marcel Pleasance
My wife , Emma and I decided we would like another child ,after a fifteen year gap between having our other two children, the time was right to start again,my wife became pregnant almost immediately,which was good news i guess but i have to admit i was quite enjoying to trying (wink wink)!  My wife took a few home test which were positive , so we booked an appointment at our local doctors.  It was confirmed, great news!
Well eight weeks flew by and it was time for our twelve week routine dating scan. we had joked about it being twins , has i am a twin also , the idea of having twins was exciting but also a bit of a dream really …….. So in we go for the scan. We had three very big shocks all in one go.
Firstly we were only eight weeks pregnant not twelve, secondly we were having twins , and thirdly they were identical.  Well I was speechless seriously, we were over the moon about it… A specialist consultant came to see us and explained it wasn’t like a normal pregnancy anymore and she would be taking care of my wife and doing the scans etc from now on … WOW …. She also told us about complication that there could be with multiple pregnancies, one being TTTS , Twin-To-Twin-Transfusion-Syndrome , a very serious and life threatening condition.  We were told she would like to see us again in two weeks, so off we went home with greatest news….but with a uneasiness of what might happen .
Two weeks passed and off we went for another scan all excited, not like a usual scan more measuring and taking notes.  Two weeks later another scan pretty much the same as the last except this time she told us there were signs of possible TTTS, as the fluid levels were different, and blood flow rate was also different between the placenta and the twins.  This got us worrying and a realization of what could be happening hit us hard.
I did a little research on the internet on TTTS and what I found was truly horrific , so I never told my wife all the bad bits , but I saw lots of couples lose one or both twins to this ……by  sixteen weeks our babies were diagnosed has having TTTS, stage one / two , we were immediately transferred to a specialist fetal medicine unit in the Birmingham Women’s hospital UK , under the care of professor Mark Kilby.
At 18 weeks he confirmed TTTS stage two, possibly three, and spoke about our options , one being selective reduction of one twin.  This wasn’t an option to us, so the next option was laser ablation of the joining vessels between the twins.  At 20 weeks we did our usual two hour trip to see  the prof, but this time my wife had packed some clothes just in case ..
It was confirmed at that scan something needed to be done , one twin was swimming in an ocean of fluid and our other twin was stuck shrink wrapped to the uterus wall.  Laser surgery was scheduled for the next morning.
We had a very sleepless night … the surgery took about an hour to hour and half , 2 litres of fluid was also removed from around our recipient twin, then came the longest six hour wait ever, until we had a viability scan to see if both girls had made it through ok.  Thankfully they had! It was the most amazing news ever and we both cried so much.
After that it was back to weekly scans one week at our local hospital and then the other at Birmingham. All seemed to be going ok until about twenty four weeks ,and my wife started showing signs of pre-eclampsia.  She was hospitalized at twenty five weeks for bed rest and monitoring , during the many blood tests she had they found that she also has hemophilia c factor eleven deficiency, so it meant her blood doesn’t clot well.  They transferred us to a regional hospital in Sheffield which has a NICU equipped to accept babies from twenty four weeks …
At twenty eight weeks exactly my wife had an emergency c section due to pre-eclampsia , and our girls were delivered ..KIERA was first she was our donor twin weighing  1lb 6oz  and then came CHARLIE our recipient twin, two minutes later weighing 1lb 12oz . 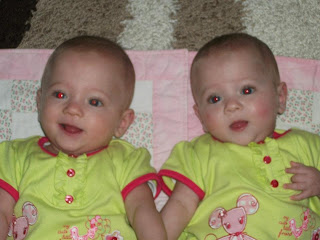 My girls spent one hundred and eleven days in NICU , which was an emotional roller coaster for us, but thankfully they’re both thriving 13 month olds , now and striving everyday to hit the big milestones in life! 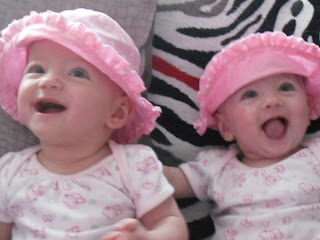