Today is World Prematurity Day (hope you are wearing purple!)

Our girls were born at 30 weeks and 5 days.  To most people that seems really early.  To someone who has has had a 24/26/28 weeker, anything beyond 30 weeks is where you hope to get.

But our girls were not normal 30 weekers.  Kathryn had all kinds of issues and Tiny suffered from IUGR, (intra uterine growth restriction) so she was only the size of a 25 weeker.  However, she was blessed to have the gestational development even if she was so small. 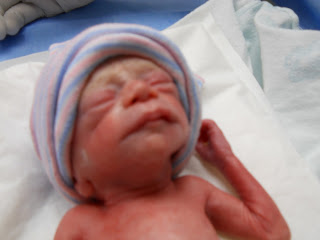 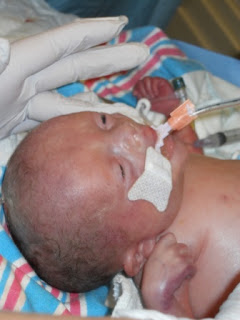 At 1lb10oz, Tiny was classified as a Micro Preemie.  REALLY TINY.  But she cried at birth, which was a sound we did not expect to hear.  It was so muted and puny.  But it was her, announcing that she was here to stay. 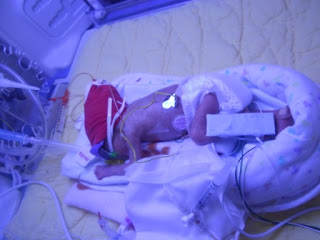 Interestingly, I always had a calmness about me with respect to Tiny.   From the day we were diagnosed with TTTS until the day she came home from the NICU after 84 days, other than a few scares, I felt confident that she was going to survive.

She was strong, defeated her odds, and just kept keeping on.

But that doesn’t mean she didn’t have her own set of struggles.

Truthfully, if they had been born even a day or two earlier, there is a good chance she would not have survived. 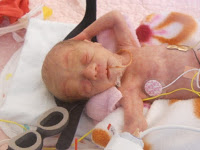 I look back on some of these pictures now and they really scare me.  At the time, having just suffered the loss of our other twin, (Kathryn died two days after birth from the havoc that the Twin to Twin Transfusion Syndrome wreaked on her little body,) we were fueled only by the words of great encouragement from the doctors and nurses.  They continued to tell us that despite Tiny’s size, she was really strong and doing well. 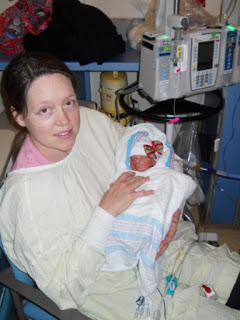 But now I look at these pictures and I am overwhelmed!  I mean look how TINY her head is in this picture?? 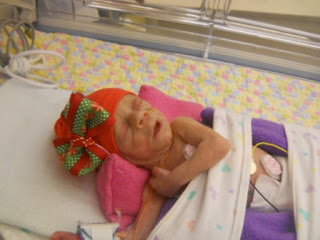 Tiny at two weeks old, on Christmas. Her pillow is a very small beanbag.  She looks big in this picture, but refer back to the picture above! 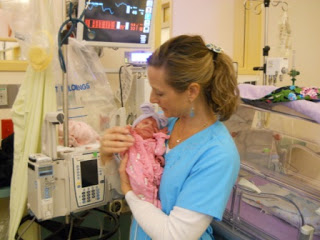 Tiny at just over a month old

A prolonged stay in the NICU is so terribly difficult.

Every time the phone rang when I was not there, I worried it was bad news.  For 12 long weeks we watched and waited for her to grow and develop.

Constantly worried that there would be a set back or a new diagnosis.

Wondering why she just could not learn to drink from her bottle.

Scared to death that something was wrong with her… something had been overlooked.

My hands cracked and bled from the constant washing, scrubbing in each time I came into the NICU.

More babies arrived daily, and we gradually progressed through the rooms as Tiny grew and stabilized.

I watched other sets of twins come and go, and hurt deeply as I saw two carseats and two babies being wheeled out in the double crib that we would never use.

We watched as all of our “friends” on this journey were sent home, one by one, while we stayed.

And finally our day came when she was ready to go home.  84 days later.

Finally life began to become a little more normal.  And our baby gets stronger by the day.

Tiny is an amazing baby. And we are blessed.

We are so grateful for the advances that have been made with respect to caring for the teeniest of the teeny.  Days like today, we talk about prematurity and share our stories to help create awareness and encourage support of the organizations that continue to push for more research and advances (like the March of Dimes).

During her time in the NICU, our Tiny benefited from key advances such as:

And so much more.