I have never taken too much of an interest in the debate over breast feeding vs. formula. I was breastfed, and I intended to at least try with my own children (although I never realized how difficult it could be!) but I knew plenty of people my age who were exclusively formula fed babies and seemed fine to me.

However, unfortunate personal life experiences and a lot of scientific research has convinced me that there is one time that breast IS best and can make a tremendous difference for the baby.

When a baby is born severely preterm and weighs less than 1250 grams (just over 2lbs) breast IS best. It doesn’t necessarily have to mean actual breast feeding – but the baby truly needs human milk.

I learned this when my identical twin daughters were born ten weeks early. Although they were identical, they had a syndrome (Twin to Twin Transfusion Syndrome) that caused Kathryn to be overloaded with fluids and Tiny suffered from Intrauterine Growth Restriction (IUGR).

Much of the first few days after my twins were born is very foggy. There was the emergency c-section to birth the babies that were ten weeks early and very sick. There was the fact that Kathryn’s heart was not working, her lungs were not working, and they could not stop the fluid from building up in her body. There were two days of being beside ourselves in worry and fear until she passed away.

Then there was Tiny. The whole 1lb 10 oz of her. She looked like a drowned squirrel, according to my father. I couldn’t hold her. I couldn’t even really touch her. I felt like I could do nothing for her except watch. 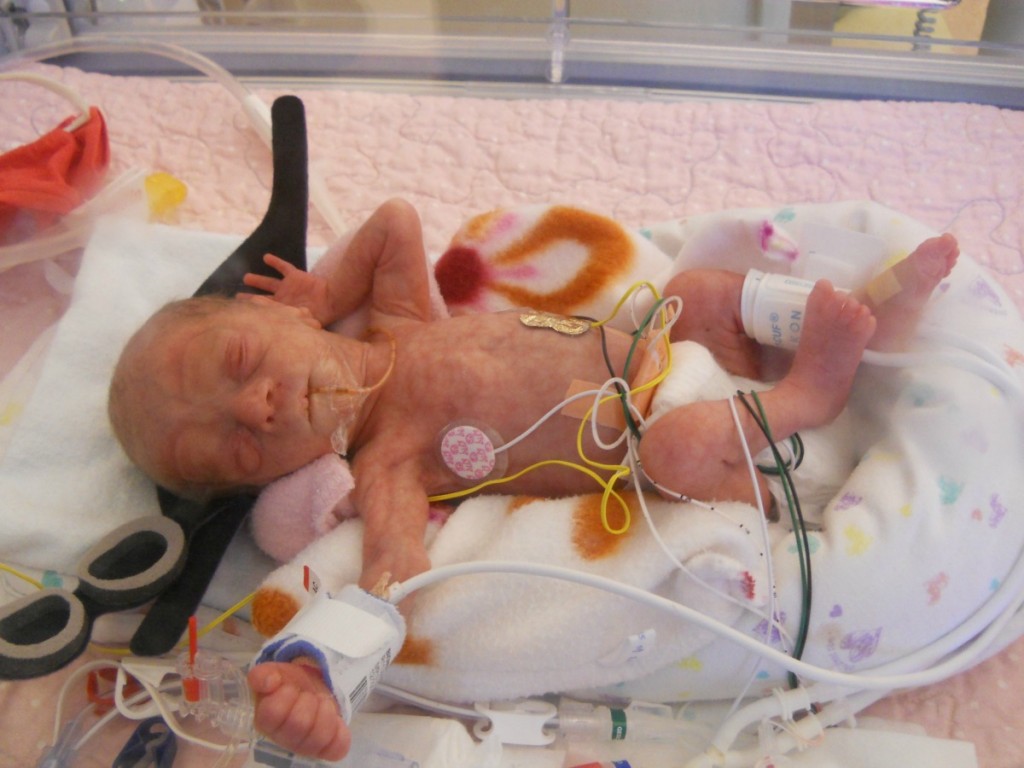 The first time they tried to see how Tiny would do with no Oxygen. It was a short trial

I had a very difficult time producing milk due to the trauma of the first few days. I kept at it diligently, despite many setbacks, frustrations and tears. While they wanted me to continue to try, my doctor also did not want me to be so stressed out about it. He told me that if I couldn’t produce the milk (and thankfully, she only needed a tiny bit for the first couple of weeks) they could give her donor milk. They would also fortify the milk with a very special product called a human-milk-fortifier, made from donated breast milk. Multiple clinical studies have shown that when extremely premature infants (500 g – 1250 g at birth) are fed a 100% human milk diet, as opposed to preterm formula or fortifier made from cow’s milk, there is a reduced risk of developing medical NEC or surgical NEC.[i]

Of course, I had a multitude of questions. I had never heard of donor breast milk or human-milk-fortifier.

The doctors explained the science to me about how important it was for the underdeveloped bodies, but honestly, I don’t remember everything they said beyond the gist: clinical studies have shown that an exclusive human milk diet protects the intestines and supports the growth of extremely premature infants (500 – 1,250 grams at birth). I had just received the run down the day before about all of the horrible medical issues a 1lb 10 oz baby could have, including bowel abruptions and NEC, so that’s all I needed to hear.

The science continues to support these assertions about the health benefits of an exclusive human milk diet for premature infants in the NICU, as opposed to cow milk-based nutrition or formula. Breastfeeding Medicine even published a study this year concluding that an exclusive human milk diet results in lower mortality for extremely premature infants.[ii]

In 2014, Dr. Hair, Assistant Professor of Pediatrics at Baylor and neonatologist at Texas Children’s Hospital, led a team of researchers to compare the growth outcomes of premature infants who received an exclusive human milk diet (EHMD) and a human milk caloric fortifier made from human cream to a control group of premature infants receiving a standard EHMD feeding regimen. In the recent report in the Journal of Pediatrics,[iii] Dr. Hair states:

“For premature babies who weigh less than 1,250 grams (about 2 pounds, 3.2 ounces) one of the problems is that their lungs and other organs are still developing when they are born. If the infant gains weight and increases in length at a good rate while in the NICU, this helps improve their outcome…

Previously, we would add oils or infant formula to help premature babies grow, but we can now use a natural source from donor milk,” said Dr. Hair. Since November 2013, the NICU at Texas Children’s Hospital has changed its protocol to add this cream supplement to the diet of infants who weigh less than 1,500 grams.

Why do premature babies need human milk or human-milk-fortifier?

I need to disclose before I go any further that this post is sponsored by Prolacta Bioscience® but I lived this and I firmly believe every word I’m telling you.

Tiny preemies and critically ill babies need more fat, protein and calories than a full-term baby would need. Human breast milk is variable in the amount of calories and fat, so adding a fortifier cream provides additional nutrition necessary for the preemies growth. The study by Dr. Hair from the Journal of Pediatrics concluded that successfully incorporating a human milk caloric fortifier made from pasteurized human milk cream into premature infants’ diets improved their growth outcomes in the NICU.[iv]

Prolacata makes the following statement about its Neonatal Nutritional Products:

When used as part of an exclusive human milk diet, Prolacta’s Neonatal Nutritional Products are clinically proven[v],[vi],[vii] to improve health outcomes, decrease mortality[viii] and reduce healthcare system costs[ix] for critically ill preemies in the NICU. All Prolacta products are from 100 percent human breast milk and are formulated to meet the needs of extremely premature infants in the NICU. This includes a standardized and pasteurized milk formulation for use in NICUs, which supports the American Academy of Pediatrics’ (AAP) recommendation that all preterm infants receive breast milk, whether their own milk or pasteurized donor breast milk if mother’s own milk is unavailable. [x]

From a NICU mom’s perspective, and even more so as a NICU mom who watched one of her babies die because medicine hadn’t caught up yet to the ailments she faced, if a well-researched, well-educated, well-respected, incredible neonatal intensive care unit (NICU) doctor tells me that giving my preemie breast milk and human milk fortifier may just save her life, I’m following their recommendations.

I am so grateful to the researchers, doctors, and companies who make it their mission in life to save premature babies. 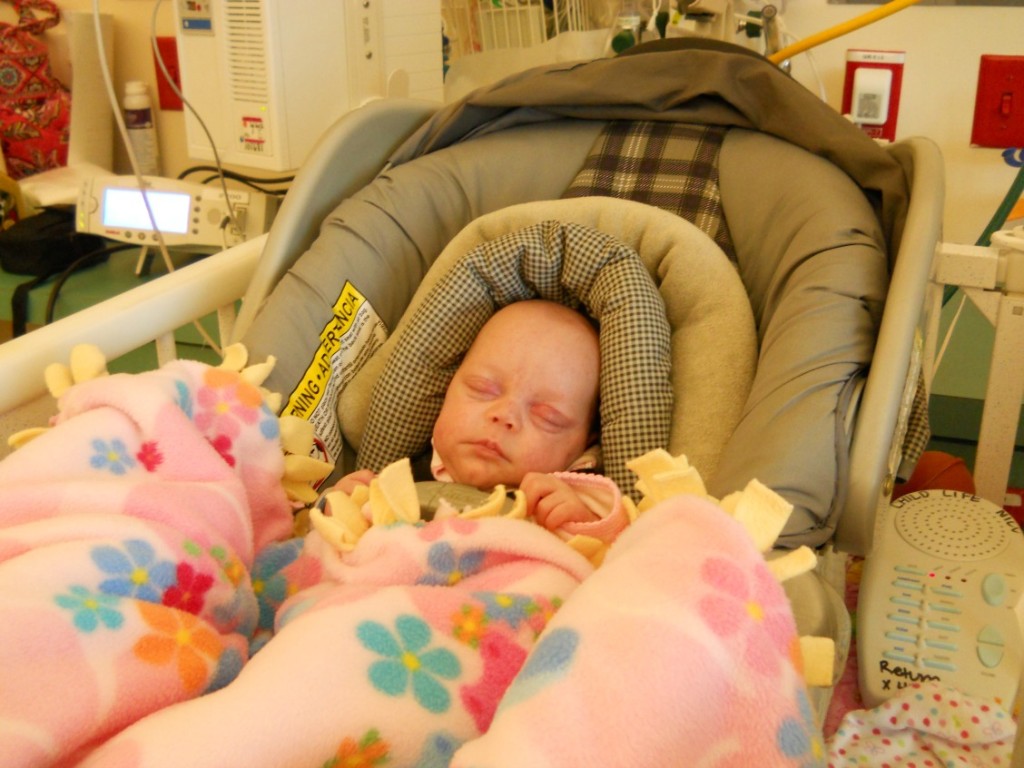 Leaving the NICU after 12 weeks – much plumper thanks to fortified breast milk.

[i] Sullivan S, et al., “An Exclusive Human Milk-Based Diet is Associated with a Lower Rate of Necrotizing Enterocolitis than a Diet of Human Milk and Bovine Milk-Based Products.” Journal of Pediatrics. 2010;156(4):562-567

[v] Sullivan S, et al., “An Exclusive Human Milk-Based Diet is Associated with a Lower Rate of Necrotizing Enterocolitis than a Diet of Human Milk and Bovine Milk-Based Products.” Journal of Pediatrics. 2010;156(4):562-567