As is the case with many of the TTTS moms I have become friends with, I met Wendy through the TTTS Grief Support Group, or maybe it was the Survivors with Guardian Angels. Either way, we both lost one twin and got to take one twin home. Wendy has taken her story and written a book – called “Toughest Teeniest Twin Soldiers” and I am actually in the process of reading it and can’t wait to share my review! So far, so good!

As I was putting together this post and looking at Wendy’s pictures, I just really marveled at the picture of her holding baby Zachary in the NICU. Even though I had a baby myself that was essentially the same weight, it is just still so shocking to see pictures that really demonstrate how TINY a 1lb baby is!

Three years ago began the shock of our lives with the news: we’re carrying identical twins! Less than a month later, we were diagnosed with Twin to Twin Transfusion Syndrome. It was St Patrick’s Day when our perinatal specialist decided to refer us to U.S.C. for intervention because he felt our case of TTTS was severe enough for laser surgery. I can remember sitting there in the lobby nervously playing with my green jewelry; consumed by such an intense fear of the unknown. My back ached so badly and I was so scared. As the doctor spoke with us, tears streamed down my cheeks. The thought of traveling out of town to try and save our unborn babies terrified me. The thought of losing these babies terrified me even more.

On March 22nd, we met Dr Chmait and his amazing team for the first time. And although we did have TTTS, it was not severe enough to risk the surgery. (Incidentally, our twin niece and nephew were born this very day: Maddison and Mitchell.) Now, fast forward a week later and we’re back at Dr Chmait’s. Our TTTS has gotten much worse. Baby Alex is critical and Baby Zachary is “stuck” with no visible bladder.

Although we underwent laser surgery to save our boys (this was on April Fool’s Day, 2010 and was the most amazing experience of my lifetime [aside from giving birth]); sadly, Baby A(lex) passed away three weeks later due to heart failure. This is a moment I will never forget. No person should ever have to experience that shock and anguish. Alexander will always be our little angel. April 21, 2010 will always be remembered as “Alex’s Angelversary”. I carried the twins for five more weeks before preterm labor awakened me on the morning of May 28th, 2010. I drove myself to the hospital, and our twins were delivered emergently at 28 weeks. One fighter was born into the NICU (Zachary Alexander) and his angel twin rose to Heaven. And our lives will never be the same… 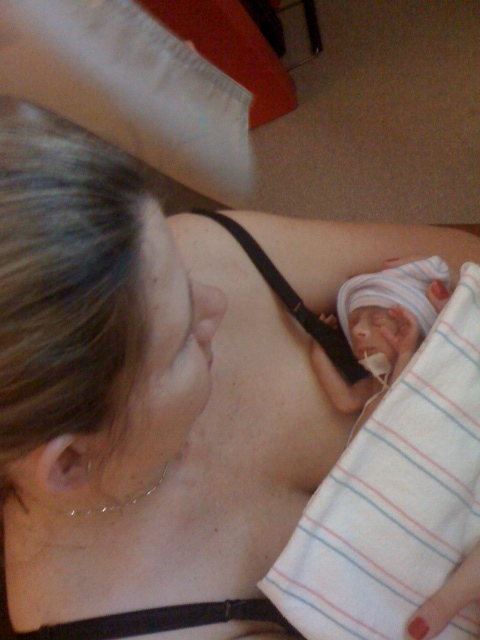 Three years later, our survivor, who weighed only 1lb 11oz at birth, is going through potty training and is a constant source of laughter and joy. He excels at everything he does, although he does have special needs, but you could never tell. We are all the more blessed to have an older son who is incredibly smart and funny as well. We call him “Big Ben”. The bond these brothers share is beyond anything I’ve ever imagined: doing everything together; and sure, they fight, but wow, their love for another is unimaginable and is without end. They laugh at each other and it’s like they have some secret language nobody else understands.

In 2011, I published a short book, “Toughest Teeniest Twin Soldiers: Living & Dying Through TTTS” because I really felt compelled to tell our story. I hope you’ll check it out if you haven’t already.

Furthermore, it has become very important to me to reach out to other families so they know they are not alone. Today I also feel very fortunate to work in healthcare where I have the opportunity to reach out to others, including medical professionals as well as various families who may not have even heard of TTTS. I proudly wear my TTTS swag and talk about it whenever I can. I love it when people ask me to talk about it. It used to feel strange, but now, I feel proud! I’m proud of my survivor and I’m proud of the friends I’ve made since our lives have been touched by TTTS. And I’m even proud to say that I have a precious angel twin. This angel has even graced me with visits on two occasions when I’ve hit my rock bottom.

Which leads me to my next point: I’m not going to act like I don’t feel emotional and ripped off when I see twins. It reminds me of what I was “supposed to have”. And sometimes I find myself extremely annoyed by twins in matching outfits (what’s up with that anyway; please enlighten me?)! But more than anything, I am feeling blessed. Because Zachary was the twin nobody expected to survive. And look at him today: he’s thriving! His charming personality earned him the nickname “The Mayor of Las Vegas” at a very young age! Even as a teeny infant with oxygen tubing in his nose, his smile and laughter were contagious. So this is what we celebrate today. We know his brother is still with us. That box on the shelf with his ashes is just a memorial. And someday, we’ll all be together again. Meanwhile, we’re singing and dancing and playing and loving and laughing our way through lives—

In fact, I participate in a bereavement support group for baby loss families called “Healing Hearts Giving Hope”. Tonight, I listened intently as one of the moms shared this beautiful reality: Someone asked her if she’d do it all over again, and even though it caused her excruciating pain, the baby she lost also brought her intense joy!! She would never forget how active he was in the womb and what a show off he was during all the ultrasounds. She experienced awful guilt thinking maybe she could have prevented his death, but now, years later, she is at peace. He is part of her family. Wow! And another mom had her son’s NICU bracelet tattooed to her wrist in white ink. So much raw and heart-wrenching beauty and I’m so grateful I have such a network of amazing families to share this with. I could go on and on, but for now, that is all…

**Thank you so much for sharing our abbreviated TTTS story. I invite you to “Like” our Facebook page for “Toughest Teeniest Twin Soldiers: Living & Dying Through TTTS by W.R. Smith”.

**Disclosure – there are affiliate links in this post. If you purchase the book through the links above, your price will not be any different, but Amazon will give me a teeny tiny thank you for sending business their way.