Today is Monday, October 14th. That day really has no meaning to me. But tomorrow does.

For those of us who have lost a baby, “October 15th” means many things. It means breaking the silence, remembering our babies, talking about PAIL, the WAVE OF LIGHT, and so many other things.

So this whole week I’m talking about related topics.

Today I’m writing about a campaign called Count the Kicks. I was contacted by this campaign because of my contributions last year to PAIL Remembrance Day, and I gladly committed to posting this message for them. It is a campaign started by five mothers who lost their babies to stillbirth, and they have such an important message. (And it was started in Iowa, the state of my birth!) 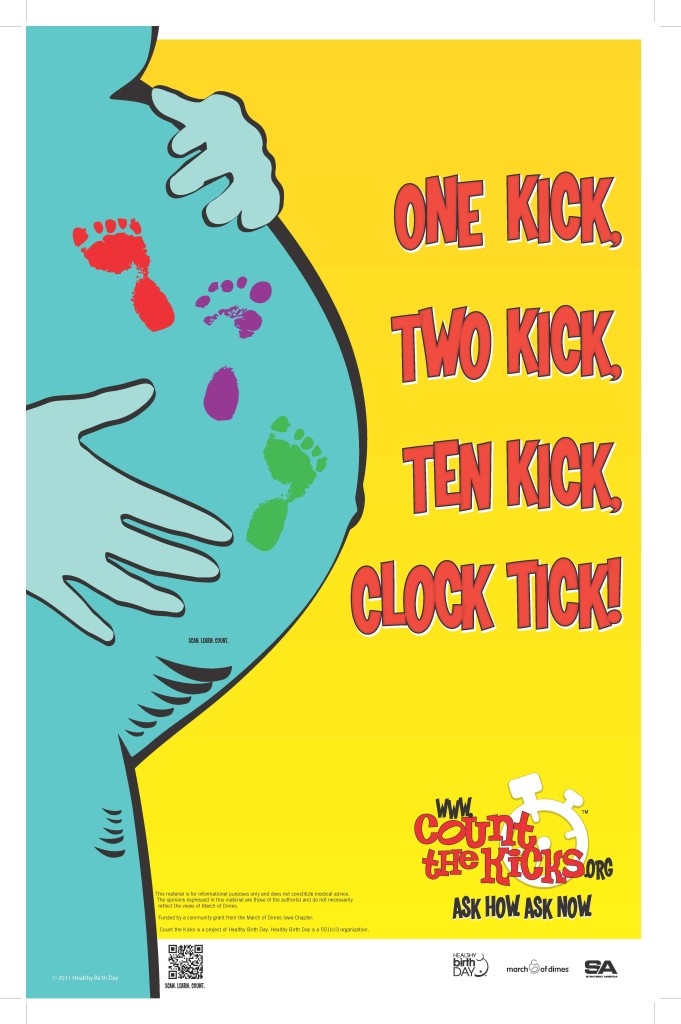 COUNT THE KICKS ACROSS THE NATION AND LEARN HOW TO SAVE THOUSANDS OF LIVES!

Tuesday, October 15th, 2013 officially marks International Pregnancy and Infant Loss Remembrance Day, a day of remembrance for pregnancy loss and infant death which includes miscarriage, stillbirth, SIDS, or the death of a newborn. The National Institute of Health estimates 26,000 stillbirths out of the 4 million births per year in the United States, meaning one in every 160 births results in a stillborn. These statistics can change dramatically with your help!

After learning that Norway had effectively reduced its stillbirth rates by one-third by conducting a public health campaign on kick counting, five Des Moines-area moms who each lost babies to late-term stillbirth or infant death founded a non-profit organization called Healthy Birth Day with the goal of preventing stillbirths and infant deaths through research, education and advocacy. In 2009, the non-profit launched a statewide public health campaign in Iowa called Count the Kicks to prevent late-term birth complications and stillbirths, urging parents to contact their health care providers immediately if they notice significant changes in their babies’ movements. Scientific studies indicate kick counting (a daily record of a baby’s movements, kicks, rolls, punches, and jabs) during the third trimester is an easy, free and reliable way to monitor a baby’s well-being in addition to regular prenatal visits. This year, the campaign is going nationwide with the help of Count the Kicks Ambassadors, seven women (Shawn Soumilas for Arizona, Kari Davis for Ohio, Meghan Petty for Tennessee, Karina Bennett for New York & California, Stacey Gripshover for Kentucky, Sapphire Garcia-Glancy for Kansas, and Sarah Firianni of Florida) from across the country who will be spreading the word about the importance of tracking fetal movement during the third trimester of pregnancy. These women will be the feet on the street, connecting with healthcare providers and expecting parents in their communities to spread Count the Kicks’ life-saving message, with the ultimate goal of reducing the national stillbirth rate.

Stillbirth and infant death may be a sensitive subject, but spreading awareness WILL help prevent the loss of more lives. To join the movement, start by visiting and liking the Count the Kicks Facebook page.

Here is an important message from the Count the Kicks Ambassadors, Mom to Mom: http://youtu.be/h5Nj9FRTZcQ

About Healthy Birth Day:
Healthy Birth Day is a nonprofit organization dedicated to preventing stillbirths and infant deaths through education, advocacy and parent support. Founded in 2003 by five Iowa mothers (Kate Safris, Kerry Biondi-Morlan, Sen. Janet Petersen, Tiffan Yamen, Jan Caruthers) who met after each lost a daughter to stillbirth or infant death, Healthy Birth Day has helped with getting Iowa’s Stillbirth Registry law enacted (which has brought more than $2 million into Iowa for stillbirth prevention research), created a local parent-to-parent network to reach out to grieving families immediately following their loss of their babies, and launched the “Count the Kicks” public health campaign to help prevent stillbirths.

Thank you for reading this important message. Please don’t forget that Sunshine After the Storm: A Survival Guide for the Grieving Mother is available for download for FREE until October 17th.