Now I know there are some people that probably think I’m bat bleep crazy for posting about a football player, but y’all, I live in South Carolina, and the one thing that binds us all (well, many of us!) together and drives us all apart down here is our love for college football!

I am a die hard University of South Carolina Gamecock fan and two time alum.  This last Saturday, we sadly watched as one of our best players, #21 Marcus Lattimore, was badly injured.  The stadium was so still and silent as we waited to see if he would hop up.  And we were ALL devastated as we realized he was really hurt.  Not only because he’s one of our best players, but because he’s also one of the best CHARACTERS on the team.  He’s the voice of the team, a natural leader, a good Christian, a positive person, a hard worker… such a hard worker.  A devoted and loyal team member.  The kind of man I hope my son grows up to be like.  The kind of athlete who is also a role model.  And the South Carolina fans adore him.

Last season Marcus’s other knee was badly injured.  It didn’t stop him.  He recovered from surgery and pushed and pushed to regain strength and his ability.  He came back strong this season and is admired by everyone for his tenacity, perseverance, and God give ability.  He is loved by everyone.  His family, team, other teams, announcers and experts.  I have listened each week as they talk about him and what an amazing player and personality he is.  And as a testament to that respect for him, for the first time in my life, I saw BOTH teams join together on the field and pray for him before they carted him off.  It was mindblowing. 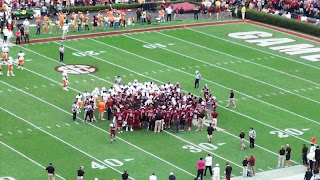 So when I watched him slam the ball on the ground and fall in pain… I felt like it was my own child down on the ground.  My own son for whom I could do nothing.  Why would this happen to him again?  Not a good kid like Marcus.

And all of those inner pangs of anger and a lack of understanding rushed right back to the surface.  WHY?  WHY God, do such bad things happen to such good people?

In this last year we suffered our own terrible loss, I’ve suffered through my dear friends loss of her sister and her mother, I’ve seen countless other mothers lose their babies… and I just struggle to make sense of it.

And then I watch as a truly good, hardworking kid sees his future, his career potentially ended.  It’s just hard to comprehend.  No, it’s not the same as losing a family member, that is not the comparison I’m trying to draw.  But it does fall into that category of “why did this happen???”

Some people believe these things happen to teach us lessons.  Maybe they happen to help us reach new potentials and achieve things we would not have tried to achieve without these events.  Maybe there is no meaning or reason behind them at all… they just happen, and we have to do our best to pick up the pieces and move on.

I don’t know.  But I do know this kid has the kind of drive that will see him back to the football field.  I know this isn’t the end for Marcus.

And we’ll be cheering him on.  Because we all love to see a hero succeed.  It gives us HOPE.

Praying for you Marcus!  For I know the plans I have for you,” declares the Lord, “plans for welfare and not for evil, plans to give you hope and a future.” Jeremiah 29:11 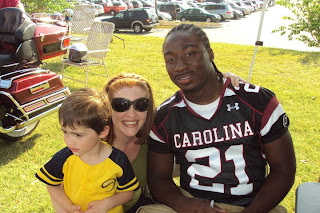 That’s my Nayner Bug on his 4th Birthday, my sister, and Marcus Lattimore, when Marcus came out with some of the other players to meet fans at a big Fun Day at one of our local churches.