No Holding Back is a place where I advocate for topics of importance in the realms of child, newborn, and maternal health. Basically, if it impacts our children, I write about it. I advocate. I use my voice. And I try to get other parents to do the same.

I had the opportunity to do something interesting the other day.

I had the chance to put my money where my mouth was. To practice what I preach. To do what I’ve been telling other to do. And so on with the cliches!

I participated in the Not One More campaign by going to the State House with some other members of Moms Demand Action to deliver postcards to our governor, Governor Haley. I took my accidental activist self straight on downtown.

What is Not One More?

I’m so glad you asked!

After the recent shootings in Santa Barbara left six dead, one of the fathers decided enough was enough. He began the “Not One More” campaign to gather as many signatures as possible for postcards to be delivered to elected officials. The idea is that “not one more death” should occur to gun violence before our leaders take action on better laws and regulations.

The postcards were inspired by Richard Martinez, the father of one of the six victims in the Santa Barbara attack, according to the gun control groups. The postcards will call for “not one more” shooting death. Martinez – whose impassioned plea made national headlines in the wake of the shooting – will personally deliver postcards to the local offices of politicians in Tennessee, Florida, Pennsylvania and Iowa.

This last week, 2.4 MILLION postcards were delivered to elected officials.  This is the stack of 4,000 cards we left for Governor Haley. 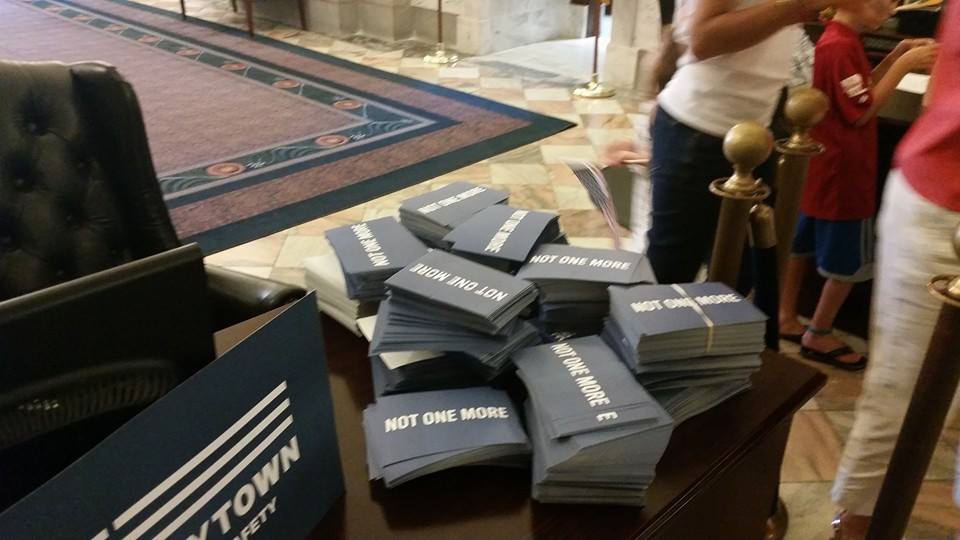 It’s truly sad that this is even necessary.

It makes me angry that our elected officials fall so easily to the whims of lobbyists and money rather than acting on what is in the best interest of their constituents.

As I stood in the State House, I spoke with one of the reporters who came to cover our delivery. I asked him how much coverage this story would get and he said “It just depends on how many crazy bad things have happened that will take the spotlight. There’s already been one shooting in town today.” It was only 10:00a.m.!

This is a MEGA problem in our country.

It’s not just the easy access to guns, it’s the lack of responsibility by so many gun owners.

One of the moms with us told the story of her daughter, Lizzie. Lizzie was murdered nine years ago when some guns were taken from a man’s house, from people he knew. He never reported the guns missing. As a result, 10 people died. Including Lizzie. This mom doesn’t want to take guns away from owners. She wants owners to be required to be responsible for their weapons. She wants them stored properly and she wants it to be a law for people to report it when weapons are stolen. You would think that would not be difficult to pass, but she has been fighting to get Lizzie’s Law passed for NINE years!

In April, a seven year old girl was shot and killed in South Carolina at a birthday party.

The family of a 7-year-old South Carolina girl wants justice after the girl was unintentionally shot and killed by another child.

According to state law, Investigators say the gun owner is not to blame.

According to the law, a firearm can be stowed in the glove box, center console, or trunk, which is where the gun was stored in this case.   The Lexington County Sheriff’s Office say a 5-year old boy in Gaston was reaching for a toy gun in the trunk when he grabbed a real gun that went off. The bullet pierced the walls of the car and fragments hit Juliet Lynch in the chest.

Joanne Hafter, an Irmo Democrat and outspoken proponent of Lizzie’s Law, says there are no adequate laws in place when it comes to gun storage. Lizzie’s Law, is named after her daughter Lizzie who was murdered in 2006 while attending graduate school at the University of Virginia.

Hafter says she wants to pass Lizzie’s Law to require guns to be reported as missing within 24 hours from them being lost or stolen. The person who shot Hafter’s daughter was in possession of such a weapon.

As one of my friends commented on my blog when I wrote about being an activist for better gun laws said “it should be a no-brainer. Why aren’t all parents pro-gun control?” And not in the sense of taking them away, but at least better laws to protect the most innocent. Common sense laws to protect our children.

Just to add more fuel to the fire, this story came across my facebook feed on Friday:

BOY SCOUT DIES FROM SELF-INFLICTED GUNSHOT WOUND: Earlier this week, a 12-year-old boy at a Boy Scout camp in San Diego died from a self-inflicted gunshot wound. Authorities are still trying to determine if the shooting was a suicide or an accident, but now believe the boy shot himself with an unregistered handgun he brought to camp from his home in Las Vegas: http://tinyurl.com/pgxuz4l

These all-too common fatalities could be drastically reduced if adults stored their guns responsibly: unloaded, locked, and separate from ammunition.

I Want Something From You

I don’t want you to go all crazy and chain yourself to a tree in an elected official’s lawn or anything (but that would be fun to watch!) but I do want you to seriously consider why you stand where you stand on this issue.

If you think that you could get behind safer storage laws and other laws to protect children, PLEASE, PLEASE take the time to email or call or visit your elected officials. If you need help figuring out what to say or do, contact Moms Demand Action. They have prescripted tweets, emails, etc right on their website, along with the contact information for all US Senate and House members. They can also help you if you’d like to set up a visit.

Better yet, join your local chapter and help. It doesn’t have to be anything more than just following the headlines and sending out tweets or signing petitions (online) as big topics come up.

But DO something. Because until they hear a large outcry, our elected officials have no motivation to take action.

Imagine if it had been your child sitting in that car, killed by an accidental discharge.

It’s time we stand up and make a difference. No other country has this problem. Why should we? We say we are the greatest nation in the world. It’s time to start behaving like it. 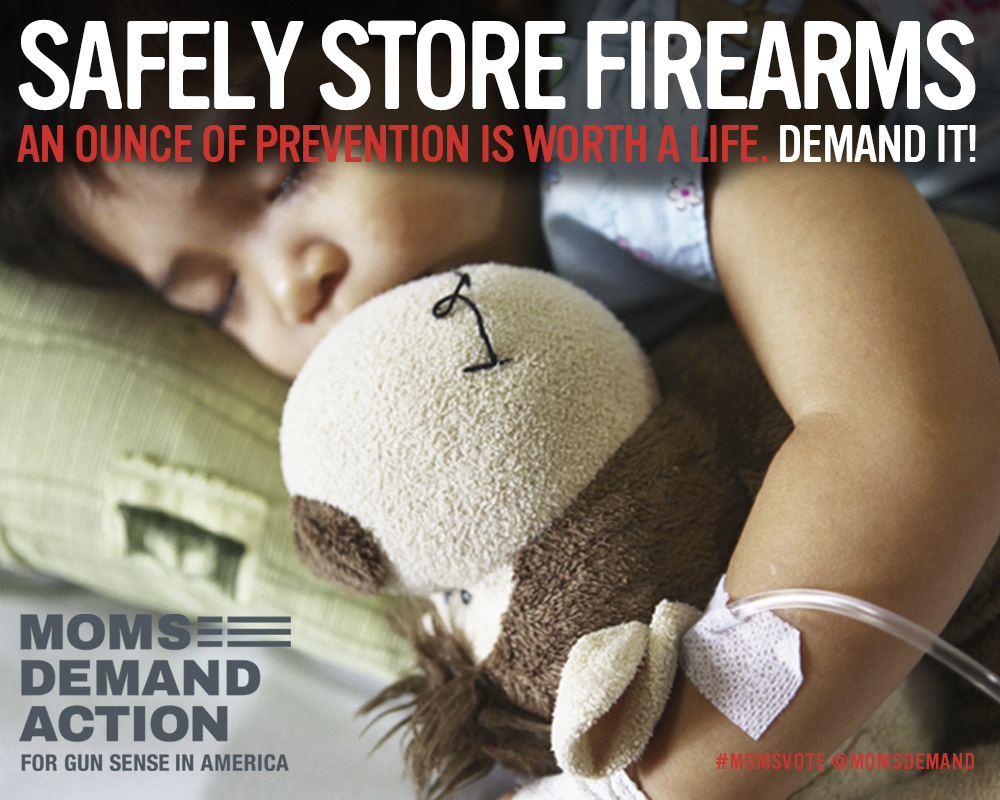