Gun violence is the number 2 killer of children between the ages of 2 and 19.

I know the topic of gun control is an extremely volatile issue.  I normally avoid the highly politically discussions on this blog, but this is a topic I feel that mothers need to be discussing.  Not fighting about, but discussing and trying to find a better solution to the problem.  I am nervous about posting on a controversial topic and hope we can all be kind.

I want to make it clear that I am NOT opposed to guns, hunting, or homeowners having guns in their homes.

What I AM opposed to is the lack of control and safety measures, the trafficking of weapons, senseless violence, and the number of children that are killed in our country each year due to gunshots. According to data by the FBI, more than 3000 are killed each year by guns, and that is not even counting accidental deaths.

I am opposed to my children being in danger.  I am FOR making this country safer for all children.

As a mother, I decided this is something I want my voice to be heard about. I want my children to be safe at school, at the movie theater, at the mall, in the streets, driving down the street, on their school bus. (I was actually held up at my bus stop when I was in 5th grade! Thankfully no one was hurt… that day!)

There are 4 million NRA members. There are 80 million moms. We demand action, and will not stop until we have common sense legislation to regulate guns and bring about an end to this epidemic of gun violence.

I joined a movement called the One Million Moms for Gun Control. Their mission is simple. Let’s get out there, talk to our elected officials, and MAKE THEM open up the debate and conversation. A real debate. With real changes.

1MM4GC is a non-partisan, non-antagonistic, about action and common sense solutions to the epidemic of gun violence.

It makes sense to me!  If we want to stop Columbine’s and Sandy Hook’s and future events of this nature, not to mention the hundreds of daily shootings and deaths, there has to be some kind of change.  Plain and simple.  There will have to be compromise.  There has to be a discussion.

1MM4GC “wants to see one comprehensive piece of legislation that incorporates a ban on assault weapons, limits magazines to 10 rounds, background checks for all gun sales, reports large sales of ammunition to the ATF.”

This is far from unreasonable people!  It’s common sense!  You don’t need a machine gun to defend your home.  One good shotgun blast will do the trick against any intruder!

Are you willing to use your voice and make this country safer for our children? 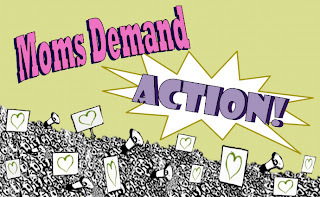 February 18-22 is officially “Moms Demand Action” week.  I received the following email that I’d like to share, that explains a bit about what the group has planned.

Next week is Moms Demand Action week. Our members of Congress are going home, to their districts, and together we are going to let them know that we support a comprehensive plan for common sense gun legislation!

Our week-long campaign kicks off on Monday, February 18, 2013. Below is a schedule for the week, as well as guidance to help get you started.

Please set up appointments with your Senators and/or House Members. Schedule as many face to face meetings as possible between Monday February 18 – Friday February 22 (with a special focus on Tuesday February 19th).

Use this link to find your representative: http://www.contactingthecongress.org/
• Type in your address and hit submit.
• Click on your representatives’ name to get the page with local office contact information.
• Call their office and set up appointments. Tell them that you are with One Million Moms for Gun Control.
• If you can’t meet with your representative ask to meet with their staffer who works on gun violence prevention issues.

Once you have set up an appointment, let us know by completing this form: http://onemillionmomsforguncontrol.org/in-district-meeting-information-form/

Mon. Feb. 18: Thank President Obama on President’s Day for his support of a comprehensive gun violence prevention package. You will be able to email and Tweet this thank-you note to the President and to your specific Congressional representatives.

Tues. Feb 19: Meeting Day! Schedule a meeting for Tuesday if possible. If not Tuesday, meetings should be scheduled whenever possible during the week.

Wed. Feb. 20: Twitter Day! Tweet your elected officials as frequently as possible between the hours of 1 p.m. and 3 p.m eastern time. We will provide twitter handles and hashtags for the day.

Thurs. Feb. 21: Email Day! Email your elected officials as frequently as possible between the hours of 1 p.m. and 3 p.m eastern time. We will provide email information that day.

Fri. Feb. 22: Call-in Day! Call your elected officials as frequently as possible between the hours of 1 p.m. and 3 p.m eastern time. We will provide phone contact information that day.

Updates on calls-to-action and events will be provided daily on the home page of the One Million Moms for Gun Control website, onemillionmomsforguncontrol.org

Copyright © 2013 One Million Moms for Gun Control, All rights reserved.
You are on the list because you opted in at our website, http://onemillionmomsforguncontrol.com/