OK, so I do not really think I am the worst mommy ever, but I am starting to believe that I am the worst stay at home mother. I don’t cook well, clean well, bake well, organize well… I”m not crafty, I can barely manage to get my kids in clean clothes every day, let alone cute little matching monogrammed clothes. I don’t always remember to brush Bean’s hair. I absolutely abhor bickering, whining, crying and all of those things.

I will probably never be featured on Meredith’s “The Mom of the Year” blog. Then again, I might be the perfect fit.

No one told me that being home with three small children would be so, well, overwhelming. I am so tired because my kids won’t sleep through the night that I actually washed my face with conditioner in the shower this morning!!

I had a “worst mommy” – rough day the other day; and it is blog post worthy…

Despite it being a happy day (my sweet TTTS miracle baby turned 2!) but I also really missed her twin sister Kathryn. That set the day out to be a little off kilter. Because doesn’t it always seem like those days you are trying so hard to be upbeat, you just can barely manage to keep it together. Tiny and I visited Kathryn’s grave quickly, and as we came inside, it began to pour. Maybe God does cry with us sometimes?

To add fuel to the fire, last year, on Tiny’s first birthday, a very, very close friend of our family was killed in a life flight helicopter crash. The 10th was the one year anniversary memorial. We miss you Andy, so much!

But stay with me here… I’m getting to the funny part.

So we dropped Bean off at pre-school, visited Kathryn, ran back to the car in the downpour, and decided to do a little bit of shopping with Tiny. We headed to Kohl’s, because they sent me a birthday $10 gift card and Tiny and I went bonkers in the clearance section. I realized (with much mommy guilt) that I had not taken any pictures of her for her birthday.

I found her the cutest little birthday outfit, so deciding it was never too late to do a birthday photo shoot, we raced home and changed her clothes. I found a white sheet (that I should have ironed) and threw it over the crib. Could not get her to smile! (Hence the reason I really found the Dose Girls post hilarious that day as well!)

But, I did get a couple of cute ones! 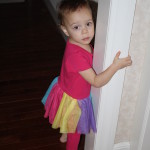 My favorite, as morbid as it may seem to some, is this picture of her kissing her twin sister’s picture. I just put it on the couch and watched to see what she would do. This is what happened.

We needed a cake.

I decided I wanted to make a homemade cake, and I wanted to make something yummy but healthy. So, I turned to my Mediterranean cookbook by Mrs. Pastides, wife of the President of the University of South Carolina, for a lovely chocolate zucchini bread. But I was going to up the ante one more notch by making it gluten free. (I am trying to live GF these days. It’s not as hard as I thought it would be.)

(Little side note on the chocolate zucchini bread. I wanted to make it a few weeks earlier, and had some zucchini that was on the fritz. So I put it in the freezer until I was ready. Note to all of you – do not freeze whole zucchini’s. When they defrost, they are nothing but mush!)

Using fresh zucchini, and armed with my handy dandy gluten free conversion chart, I set to work. Tasted the batter… YUM. Placed in the oven. Baked.

Removed this from the oven: 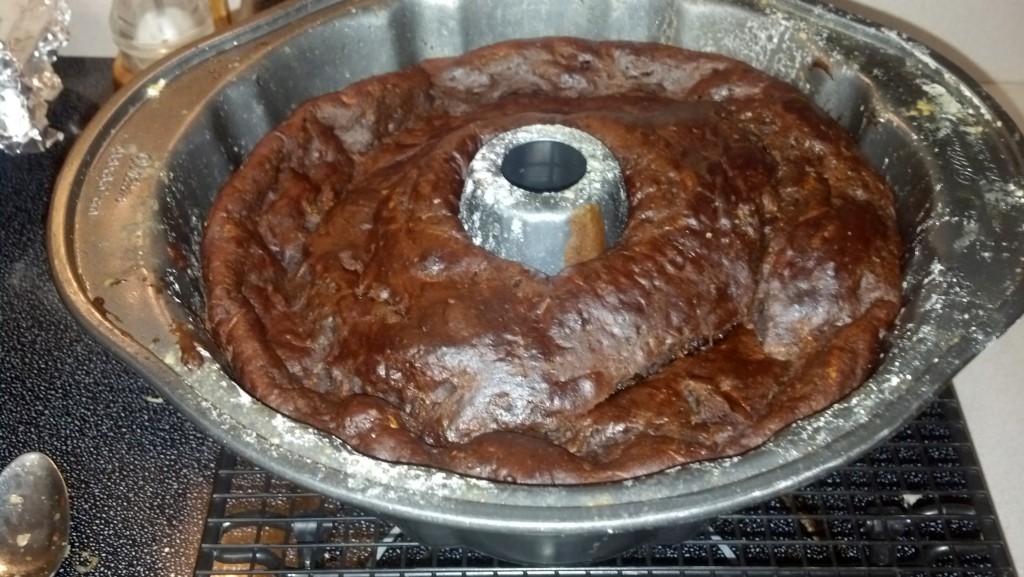 I nearly had a meltdown. However, I kept my cool, flipped it out, and covered the heck out of it with powdered sugar. And you know what? It was salvageable and it was GOOD! 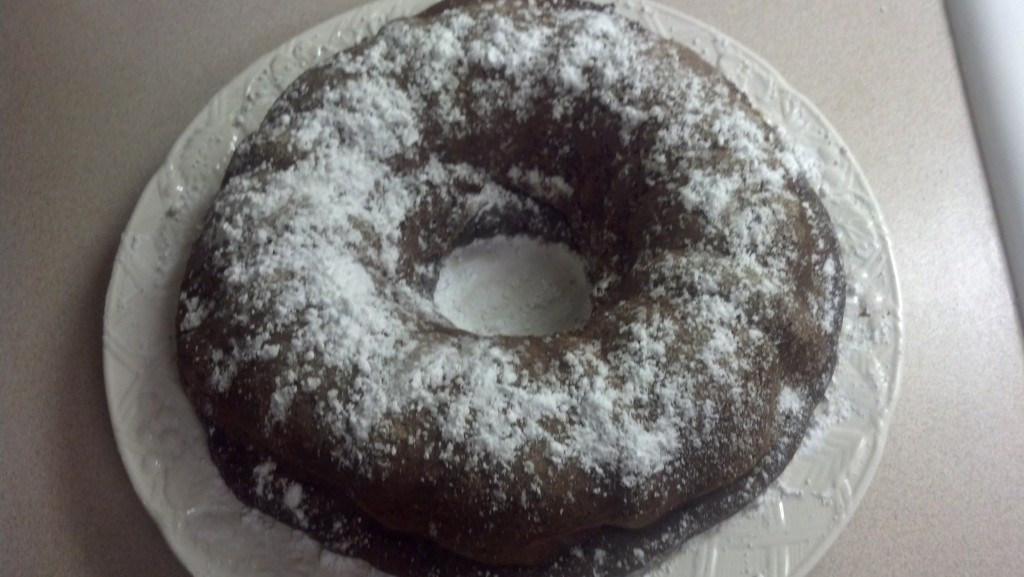 You might be thinking “Good save, Alexa!” But I was NOT done that day peeps.

I still had to make dinner.

I try so hard to be a good cook. And I guess I am not terrible. I can throw things together that taste different. But I am bad at the planning aspect.

I had some thawed chicken breasts in the fridge, and I thought, “Chicken chili sounds good to me tonight!” So I started chopping onions, green peppers, garlic and threw it in the covered baker (one of the best Pampered Chef investments I ever made!) Chopped the chicken and threw it in. Opened up the cupboard, where I was just certain that I had some great Northern Beans only to find that what I actually had was chick peas.

Oh noooooo! I was seconds away from the MOTHER of all Meltdowns at this point (I had failed at everything I tried to do that day!) We didn’t have any tortilla shells, so turning the dish into enchiladas was not an option. So, I decided to just go for it.

I love chick peas, particularly in home made hummus, but in chili??

I threw in a can of drained chick peas. Then I added some chopped squash and zucchini, cumin and other seasonings, and threw it in the microwave.

Finally, it was done.

I opened the lid and smelled. Smelled good. Chopped up a bunch of cilantro for good measure, and threw it in there. (I think cilantro is a magic herb for making just about anything southwestern taste yummers!) and this is what I had before me: 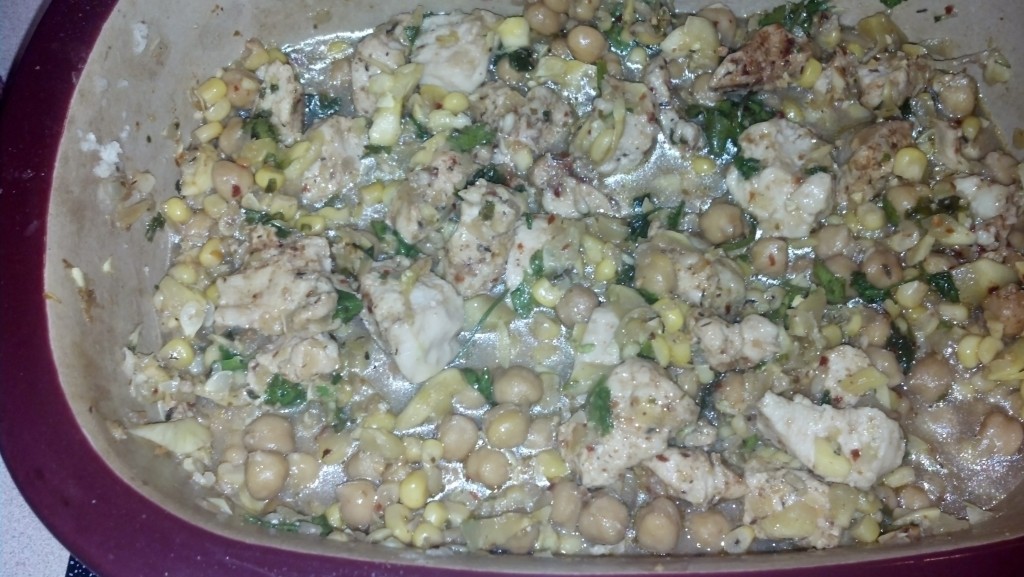 I’m not sure if that picture makes it look better or worse… but I will tell you, that with enough cheese and sour cream, it really tasted fine. The problem was the texture. Chick peas and Great Northern Beans are quite different in texture.

Needless to say, the kids started to cry when they saw what was for dinner. For once, I didn’t even make them take a “no thank you bite.”

They ate macaroni and cheese for dinner.

My husband choked down a bowl of it, good soul that he is. It would be a great recipe with the right beans!

This is how life goes for me.

I try to do the right things, make good decisions, and do well by my children. But somewhere along the line, it all seems to go haywire.

Maybe you can relate?

If you have similar days, you want to check out The Mother of All Meltdowns: A Bunch of Hot Mamas Losing their Cool. About real life moments and how they kick us in the pants sometimes.

But luckily, we have each other to fall back on, right?

I’d love to hear your cooking disaster stories! Or any “worst mommy” meltdown moments. In fact, you can visit a whole bunch of ladies talking about their Meltdowns at the Mother of All Meltdowns.